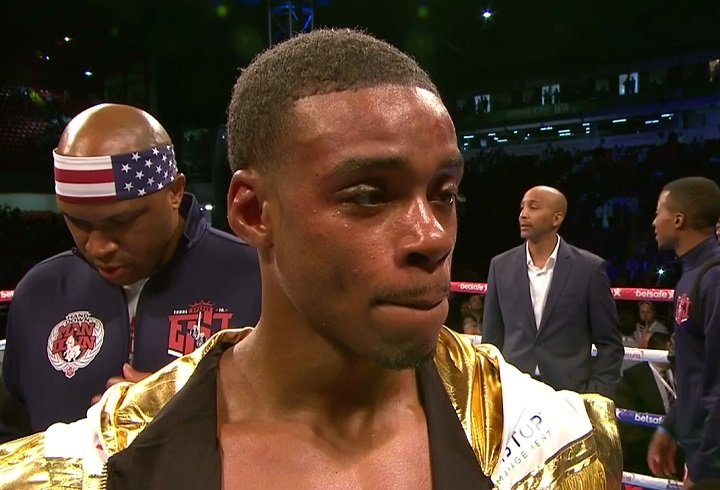 By Dan Ambrose: Errol Spence Jr. says he’d take the winner of the September 16 fight between Gennady “GGG” Golovkin and Saul “Canelo” Alvarez if the opportunity presents itself to him. Spence is currently the IBF welterweight champion, but he says he’s weighing over 160 pounds right now. He’d fight the winner possibly.

It would be a tough fight for the 5’9” Spence, who recently stopped Kell Brook in the 11th round earlier this year on May 27 at Bramall Lane in Sheffield. England. Spence hurt Brook, fracturing his left eye socket midway through the fight. Brook later took a knee in the 10th and 11th rounds. He was counted out in the 11th.

Spence, 27, wants to fight WBA/WBC welterweight champion Keith “One Time” Thurman this year, but he doesn’t think it’s going to happen due to Thurman coming off of elbow surgery. Spence isn’t going to wait around for that fight. He plans on fighting in October or November. Whether that fits the schedule for the winner of the Canelo vs. GGG fight is unclear.

“I’m not going to wait on Keith,” said Spence to Fighthype. “I think he’s coming back in early 2018. I could do it,” said Spence when asked if he’d like to fight the winner of the Saul Canelo Alvarez vs. Gennady Golovkin fight. “I’m above 160 right now.”

Spence would be competitive with either Canelo or Golovkin. I think Spence might have too much for Canelo. We saw Erislandy Lara give Canelo huge problems with his jab alone. Likewise, Floyd Mayweather Jr. won an easy decision over Canelo in 2013. Austin Trout outworked Canelo, but wasn’t given the decision in their fight in 2013. Trout and Lara fought Canelo really close. Spence has better offensive tools than Lara and Trout. He would have the option of boxing Canelo from the outside using his jab or trying his lucky to beat him with body shots.

If there’s a weakness in Canelo’s punch resistance, it’s him being able to take body shots. Canelo doesn’t react well when hit to the body. Canelo can handle head shots without any problems, but he definitely doesn’t like getting hit downstairs at all.

“That’s a great fight. I see Canelo winning it,” said Spence in picking Canelo over GGG. ”I like Canelo. He’s fundamentally solid. He’s got great skills. I see him pressing Triple G out. I think Canelo is the better fighter fundamentally. I think Canelo throws more punches. I know they’re in bunches. He throws punches in different angles. He just lets his hands go more than Triple G. Triple G throws one punch at a time. Canelo’s the guy that will press the issue,” said Spence.

There are a few problems with Spence’s opinion about Canelo being better than GGG. They are as follows:

– Canelo doesn’t throw of continuous punches. He throws them in brief spurts. He then needs to rest on the ropes from having exhausted himself. Canelo’s stamina is like older fighter much older than his chronological age. When Canelo was in his early 20s, he was able to throw punches in a sustained manner without needing as many rest breaks, but not anymore. Canelo needs plenty of resting periods after he throws punches. Golovkin doesn’t get tired, so it’s going to be bad for Canelo on September 16.

– Golovkin throws fewer punches than Canelo, but they’re much harder shots. The type of shots Golovkin throws is the type that will wear Canelo down and eventually stop him.

– Golovkin has more ways to win than Canelo. Golovkin can slug or he can use his power jab to box and dominate from the outside. If Golovkin is having problems with Canelo’s speed and combinations in fighting him at midrange, he can change tactics and revert to Plan-B by using his long jab to out-box him the way that Erislandy Lara and Floyd Mayweather Jr. did. Lara was arguably robbed in the Canelo fight, but that was a long time ago. I don’t think Golovkin will get robbed in a similar manner, because he’s too popular and there are too many eyeballs on this fight.

Spence will likely need to make some adjustments to his opinion of Canelo being better than Golovkin after they face each other. Hopefully, Spence isn’t going to resist acknowledging that he messed up on his opinion if Golovkin knocks out Canelo. that would look bad if Spence starts making excuses for him.

It’s difficult to agree with Spence in his opinion that Canelo will “press” Golovkin out. I don’t see Canelo being able to knockout Golovkin. I don’t think he’s going to beat Golovkin either.

Watching Canelo lose the first 5 rounds against Amir Khan before knocking him out in the 6th, I don’t think he’s going to do well at all against Golovkin. Canelo isn’t a knockout puncher unless he’s fighting guys with fragile chins like Khan, James Kirkland and Liam Smith. Canelo needs to throw A LOT of punches to score knockouts, and the only way he can that is when he has a punching bag without power that can hurt him back.

For Canelo to knockout GGG, he’s going to need to stay in the pocket and batter him with a massive amount of shots. Even if Canelo is out-landing Golovkin 4 to 1, that 1 punch that Golovkin lands will likely cause Canelo major problems, especially if it’s aimed at his vulnerable midsection. I see Canelo as a smaller David Lemieux, but without his power and his height. Lemieux, 5’9 ½”, is a little taller than the 5’8” Canelo, and a much better puncher.

Lemieux is a real middleweight in terms of power and frame. Canelo is still a junior middleweight, but his metabolism has slowed, making it necessary for him to move up. Canelo is like Miguel Cotto in some respects. Cotto’s best weight was at 147. Since moving up to 154, Cotto has generally played second fiddle to bigger or more talented fighters. If Cotto could have stayed at welterweight for the last 8 years, he’d have accomplished more with his career.

Canelo is too small for middleweight. His fight with Golovkin will show that to the world. If Canelo doesn’t move back down to 154 after he loses to Golovkin, then he’ll do it after he gets beaten by the likes of Danny Jacobs or Jermall Charlo. I’m not sure if Canelo’s promoters at Golden Boy will let him fight Charlo and Jacobs through. I suspect that Golden Boy will move Canelo in the opposite direction of those guys.

“I’m going to fight this year,” said Spence. “I’m not going to wait on anybody. The last time I waited on somebody, I waited 9 months. There is no telling when Thurman will be back. I’ll fight in October or November,” said Spence.

Spence (22-0, 19 KOs) called out Danny Garcia recently, but that’s a no go for him. Spence’s next fight in October or November will be a voluntary defense. Unless his manager gets him the winner of the Canelo-Golovkin fight, it’s likely that he’ll fight a fringe contender. It’ll probably be a recognizable name, but not a big name I could see it being someone like Luis Collazo. 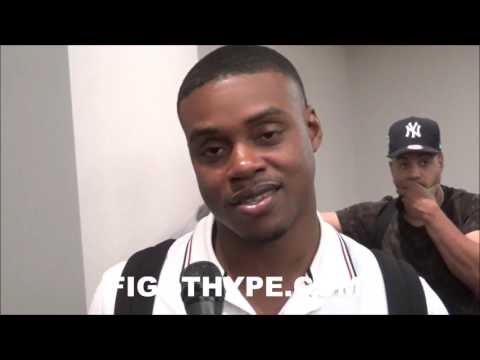 
« Broner-Garcia: This is the end of the line for Adrien says Porter

An Answer for Adrien “The Problem” Broner »