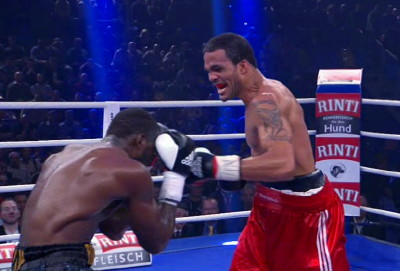 By Scott Gilfoid: #8 IBF contender Tony Bellew (25-2-1, 16 KOs) just saw his pathway to a world title shot in December cleared with the news that IBF cruiserweight champion Yoan Pablo Hernandez (29-1, 14 KOs) has been officially stripped of his IBF by the International Boxing Federation title for failing to defend the title for the past 13 months.

Hernandez has had injury problems that has kept him from defending his IBF title. It was reportedly last week that the IBF was making the move to strip the 30-year-old Hernandez of his title, and now it is official, according to fightnews.com.

Hernandez was previously scheduled to Ramirez on October 2nd, but injury problems kept Hernandez from making that date. He attempted to reschedule the fight for a later date. Unfortunately for Hernandez, the IBF stepped in and stripped him of his IBF title rather than letting him reschedule for a second time.

Hernandez had held the IBF title for four years since his win over Steve Cunningham in 2011. Hernandez was able to defend his IBF title four times in four years in defeating Cunningham, Troy Ross, Alexander Alekseev and Firat Arslan.

During his time as the IBF champion, Hernandez never had to take on the really tough cruiserweight contenders such as Rakhim Chakhkiev, Dmitry Kudryashov, Olesandr Usyk, Ilunga Makabu, Krzystof Wlodarczyk, Krzystof Glowaki, Thabiso Mchunu, Murat Gassiev or Ola Afolabi. It would have been extremely unlikely that Hernandez would have beaten any of these fighters.

Even if the IBF didn’t strip Hernandez of his IBF title, his time as the champion was nearing the end, as he would have had to face Murat Gassiev or Rakhim Chakhkiev sooner or later. Those guys would have likely beaten Hernandez to take his IBF title.

It didn’t make sense at the time due to Ramirez and Hernandez scheduled to fight each other on October 2nd, but Bellew obviously knew that Hernandez was pulling out of that fight as well and would be stripped of his IBF title. Bellew’s promoter Eddie Hearn is obviously going to be making a deal with Ramirez’s promoter to let Bellew get the title shot rather than the arguably much more talented fighters ranked above him like Gassiev, Rakhim Chakhkiev, Marco Huck and Dmitry Kudryashov. I think Bellew would lose to all four of those fighters by knockout in one-sided fights.

There’s talk of Ramirez defending his IBF title on October 2nd against 35-year-old #14 IBF fringe contender Ovill McKenzie (25-12, 13 KOs) in what will likely be a terrible mismatch. Ramirez should have no problem obliterating McKenzie, who has won his last four fights against weak opposition since being stopped in the 11th round by Enzo Maccarinelli in 2013.

It will be really sad if Ramirez becomes the same type of world champion that Hernandez was with him taking soft opposition instead of the talented contenders, but judging by the McKenzie fight and the possible defense against Bellew in December, I think we might be seeing that from Ramirez. McKenzie would be a last minute replacement opponent for Ramirez, as he was supposed to be fighting Hernandez on October 2nd. You kind of can’t blame Ramirez for taking a soft touch for this fight, but you can blame him if he takes on another soft touch in Bellew in December.

Roger Mayweather: Cotto will get whooped by Canelo! »