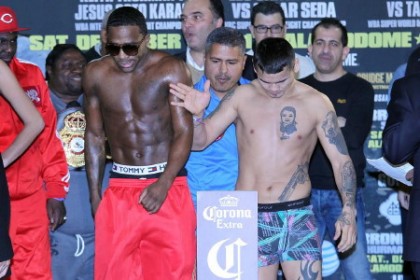 Schaefer wants to hurry it along by having Broner face the unbeaten Floyd Mayweather Jr. (45-0, 26 KO’s) in 2014. But the thing is, Schaefer needs the boxing public to help him out by creating pressure on the two fighters to face each other in the ring, because both of them are good friends.

It’s almost like a father-son type of a relationship between Mayweather and the young 24-year-old Broner, who copies Mayweather’s fighting style – or at least he tries to.

It’s going to take a massive amount of pressure to get Broner to agree to fight Mayweather, because he seems a lot more reluctant to take the fight than Mayweather does. Broner must have a pretty good idea how that fight would wind up if he were to agree to it. He’s far too slow and immobile to be competitive with Mawyeather, and it might be a loss to one-sided for Broner that he would have a very difficult time moving forward afterwards with his career.

I think Mayweather would mess Broner up mentally by clowning him for 12 rounds, and beating him much worse than he did with his last two opponents Saul “Canelo” Alvarez and Robert Guerrero. At least with those guys they could move around the ring and they had size going for them. Broner is just a short 5’7″ fighter who is basically a stationary guy with moderate had speed and power, and who doesn’t have the ability to move or throw a lot of punches.

There’s definitely some built in limitations with Broner that would result with him getting clowned by Mayweather. The only way Broner doesn’t get made to look ridiculous in that fight is if Mayweather has mercy on him and stays in 1st gear for the entire fight. If Mayweather shifts into 2nd and 3rd gears, we could have Broner end up like Victor Ortiz with him getting knocked out after attempting to foul out of frustration.

It would be definitely difficult for Broner to move on from a one-sided loss to Mayweather. He would no longer be seen as the next Mayweather, and his future opponents would use the Mayweather fight as a blueprint to beat Broner again and again.