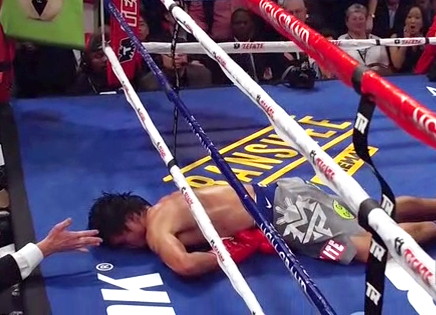 By Chris Williams: Marco Antonio Barrera isn’t giving fellow Mexican fighter Juan Manuel Marquez too much credit for having knocked Manny Pacquiao out cold in their fight last December, and nor is Barrera giving Marquez credit for having dominated Pacquiao in their three previous fights before that.

Visiting the Philippines to watch a fight this weekend, Barrera said to the sports.inquirer.net “I don’t believe he [Pacquiao] is doing down [fading]. It just happened that he got caught by a lucky punch. One more round and it would have been the other way around. Pacquiao won the first three, and Marquez won the last and that’s it.”

I almost get the impression that Barrera is hoping somehow that maybe Pacquiao will agree to fight him again because it’s hard to imagine him pouring all these compliments over Pacquiao’s head without some kind of purpose.

Let’s be clear on this: it wasn’t a lucky punch that Marquez landed that knocked Pacquiao out. It was simply Marquez doing what he always does, and that’s set traps for his opponents.

It’s just that Pacquiao couldn’t handle the power from Marquez’s right hand shot. There was nothing lucky about it because Marquez had already proven earlier in the fight that he could drop Pacquiao. I’m not sure if Barrera saw the right hand that Marquez dropped Pacquiao with in the third round. If so, then I can’t imagine him calling that a lucky punch as a well.

As for Pacquiao not fading as a fighter, I don’t know how Barrera couldn’t have noticed how much slower Pacquiao has become in the last two years. He’s lost his last two fights, and looked poor in both of them. That’s not because Tim Bradley and Marquez got lucky. Pacquiao looked poor because he’s aging. He’s 34 now, and that’s old for some fighters.
I think Pacquiao getting knocked down twice by Marquez was from a combination of Marquez getting stronger and Pacquiao getting older. Maybe if Pacquiao was younger he wouldn’t have been dropped twice by Marquez.