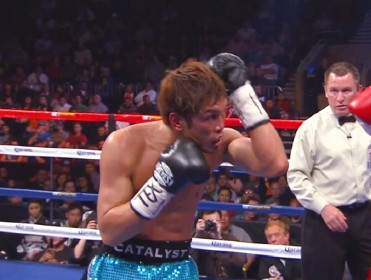 By Allan Fox: WBA middleweight champion Gennady Golovkin (25-0, 22 KO’s) is reportedly set to be back in the ring on March 30th against 37-year-old Nobohiro Ishida (24-8-2, 9 KO’s) in Monte Carlo, according to Steve Kim. This is little more than a stay busy fight for Golovkin to keep in shape while he waits for some bigger fights to open up for him.

Ishida would have been considered a good fight for Golovkin had this fight taken place two years ago following Ishida’s 1st round knockout win over a rusty and flabby James Kirkland in 2011. However, Ishida’s career luck has gone sour for him with him losing his last two fights to Paul Williams and WBO middleweight champion Dmitriy Pirog in lopsided 12 round decision defeats.

The 6’1” Ishida has never been stopped before during his 13 year career, but I think there’s a good chance that he’ll get stopped against Golovkin unless he’s able to keep the fight on the outside for 12 rounds to just survive.

Ishida is good at moving around the ring to avoid taking big punishment, but he’s going to have it tough against Golovkin because the ring will get cut off him and he won’t be able to move nearly as well as he usually does.

If this fight comes off Golovkin will likely take a lot of heat for making this choice, but you have to understand that this is just a stay busy fight for him. It’s better for him to take this fight then to stay inactive while waiting for then top middleweights to finally show some interest in facing him. IBF middleweight champion Daniel Geale mentioned wanting to fight Golovkin in 2013, so that’s one possibility.

Ishida was badly beaten by Paul Williams and Pirog. It was hard to understand why Pirog’s team picked Ishida as a title challenger given that Ishida had badly lost his previous fight to Paul Williams. It just made Pirog look like he was just milking his title instead of looking for worthwhile opponents.