De La Hoya: I thought about making a comeback, but my body wouldn’t let me 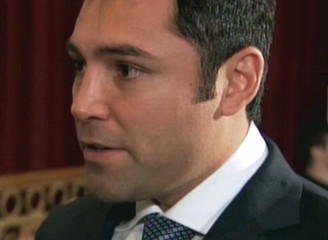 De La Hoya told ESPN “I can’t do it, can’t do it…I went running, I went training, did that for a few days. But my body couldn’t handle it. I’m 39, but I’m an old 39…If I have a desire of coming back, I go and work out, and there goes those plans.”

It’s a good thing that De La Hoya didn’t try and fight Sturm because he would have taken another beating from him even worse than their previous fight in June of 2004, where De La Hoya won a very controversial 12 round unanimous decision by the scores of 115-113, 115-113 and 115-113.

Few boxing fans that have gotten the chance to see that fight felt that De La Hoya deserved to get the decision. Sturm was the more powerful fighter with the quicker hands and the much better jab. He really worked a flabby De La Hoya over with jabs and hard combinations and by the fight, De La Hoya’s face was badly swollen from all the shots that he took in that fight.

If you remember that was the fight before De La Hoya’s huge money fight against Bernard Hopkins, and it’s fortunate that De La Hoya was able to get a decision against Sturm because had he lost the fight he wouldn’t have gotten the much bigger paying bout against Hopkins in September of 2004. De La Hoya ended up getting stopped in the 9th round by a body shot from Hopkins.

« Tony Bellew: I’m on the verge of great things