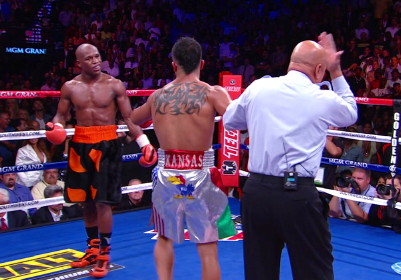 By Babatis Banda: It is undisputed fact that Floyd’s defence is his main asset. It would be an understatement though, if anybody says Floyd is just a defensive fighter. Floyd’s incredible ‘shell-like’ defence system is key to his illustrious career. He is unbeaten in forty-two bouts, and still the freshest of all the competitive top boxers there are today because he is hardly hit his entire career.

Floyd is in his mid-thirties and has seemed to mature with age. He is getting stronger, and more aggressive. However, Floyd’s aggression is ‘controlled aggression’ rather than the usual uneducated, pure hustling or physical bullying reminiscent of Manny Pacquiao, the likes of Ricky Hatton and Victor Ortiz. In the Mosley fight, we saw Floyd stand right in front of Mosley and backed him off just as he promised he would. Against Ortiz, Floyd did exactly the same, took Victor out of his game by being the aggressor and cut the ring in an amazing manner.

Floyd’s style stands out because he is simply hard to hit, and if he is not hit, he cannot get hurt. His posture allows him to do staff no other boxer does today. His power emanates deep from his hips and is transmitted through his torso to the hands in the same manner a vehicles will transmit power right from the pistons, through the gear system into the driving shaft. He is simply amazing. He gives an impression that he is firing a jab, but what comes out is a thunder-bolt of a power packed straight right, the main ingredient for destruction of any left handed fighter. He is agile, very calculating in everything he does. He does not get distracted while he is in the ring, his concentration is unmatched to say the least.

Floyd will roll with the punches and his ‘patented’ shoulder roll allows him to do several things. He removes the ‘sting’ in the punches using his shoulder while it allows him to have the leverage to set a surprise attack right from the defensive posture. While the shoulder protects his head, his left elbow and right arm are in position to thwart any body attack. Incredible…isn’t it? You can only be a hater not to notice and appreciate these skills. Floyd no longer uses his legs that much, at least as seen from the Mosley and Ortiz and even Marquez fights. He uses intellect and his upper body so well that he conserves energy and paces himself well for the latter and more energy demanding rounds.

Floyd’s ability to adjust to his opponent’s style is just another important aspect. He reads the situation and without waiting for the corner to do something, he adjusts. He is also sitting-in his shots more and more, delivering more and more power. If the situation gets tough, Floyd is capable of fighting from the ‘back-heel’. He is a superb counter puncher and takes advantage of his opponent’s mistakes and punishes them mercilessly. You will also notice that Floyd creates that extra reach through unmached posturing and can make it difficult for anybody to fight from the inside. He has of late developed into a superb in-fighter as well. Floyd can take a punch when hit flash, though rare, we now all know that he has a solid jaw.

There is no single welterweight with all these qualities and Floyd will destroy anybody who stands in his way.

« Hellenius being groomed for the Klitschko’s