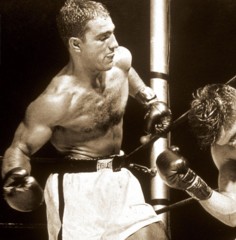 By John F. McKenna (McJack): Marciano easily dispatched Walcott in the 1st round of their return match on May 15, 1953 in Chicago. Next Rocky KO’d Roland La Starza in the eleventh round. Rocky’s legend as a power puncher continued to grow as a result of his match with La Starza. In their first fight in 1950 Rocky won a very close decision. In the return Marciano bludgeoned La Starza wherever he could hit him, arms, shoulders and legs breaking blood vessels at the point of impact. La Starza complained later that by the mid to later rounds he was unable to lift his arms to defend himself, also stating that Rocky was much improved since their first fight. Next Rocky scored a fifteen round decision over Ezzard Charles. Out of Marciano’s six title defenses, Charles was the only contender to go the distance. Although he lost the decision, the fact that Charles had gone the distance with Rocky earned him another shot at the title. In the return match with Ezzard Charles, Marciano began to bleed profusely when he received a gash in the middle of his nose. The cut was so serious that the referee was on the brink of stopping the fight. In between the 7th and 8th rounds, Rocky pleaded with the the referee for “one more round”. Rocky stormed out of his corner and KO’d Charles in the 8th round. Next Rocky KO’d British Heavyweight Champion Don Cockell in the 9th round.

In Rocky’s last fight he KO’d Light Heavyweight Champ Archie Moore on September 21, 1955. Moore was attempting to move up to the heavyweight division and had fought several heavyweight contenders. Archie had Rocky down for a count of four in the 2nd round. Marciano, as was his habit, continued to apply his bludgeoning pressure, hitting Moore wherever he could and wore him down. Moore was KO’d in the 9th round. Afterward Archie would say that whenever he attempted to feint Rocky with a left or a right, “He would just blink at me and keep coming! I would have been better off if I had just hit him in the first place.” Rocky retired on April 28, 1956.

Rocky Marciano was named “Fighter of the Year” three times by Ring Magazine and three of his championship fights were named “Fights of the Year” also by Ring Magazine”. A 2006 ESPN poll voted his 1952 KO of Jersey Joe Walcott as the “Greatest Knockout Ever”. Rocky received the Hickock Belt in 1952 for being the top professional athlete of the year.