Would Pacquiao have fought Sergio Martinez if he hadn’t had to vacate his WBC junior middleweight title? 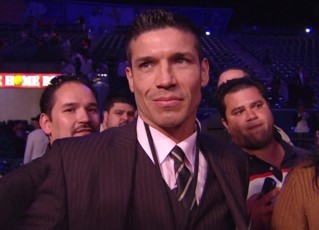 He couldn’t keep both for some strange reason. He gave up the WBC junior middleweight title. However, had he kept the title, I wonder whether Pacquiao would have chosen to fight him for the title or if Manny instead would have steered clear of Martinez and fought a rematch with WBA light middleweight champion Miguel Cotto instead. I find it hard to imagine that Pacquiao would fight Martinez.

The reason is Martinez, until he was forced to give up one of his titles, was considered to be the best fighter in the junior middleweight division by far. With his huge talent, southpaw fighting style, foot speed, hand speed and just massive boxing skills, I think he would have easily beaten a fighter like Pacquiao. I see it as a lopsided 12 round decision, much worse than the recent schooling that Juan Manuel Marquez put on Juan Diaz this past weekend.

I think if Martinez was still the WBC junior middleweight champion, neither Pacquiao nor Antonio Margarito would be getting anywhere near this guy. It would be like signing on to get beaten. Instead, we’d have Pacquiao go after the smallish, 5’7” Cotto, who in turn, will be beaten if he ever fights anyone like Alfredo Angulo, Sergeii Dzinziruk and James Kirkland.

I don’t see the point in Pacquiao fighting Margarito for the vacant WBC junior middleweight title. How is that two fighters who have pretty much zero experience at that weight or allowed to fight for the vacant title over the other top contenders in the division? It was perfect timing that Martinez was kind of forced to make a decision on the belt?

Could you imagine if he had decided to keep it? I don’t think you get either Pacquiao or Margarito anywhere close to the ring with a guy like Martinez. But it just seems really strange that we have Pacquiao and Margarito fighting for the vacant title at junior middleweight rather than some of the contenders that have been fighting at that weight, waiting for a title shot and have been seemingly passed over. That’s seems totally unfair. It seems like a paper title to me when you have two fighters going at it who haven’t been fighting at junior middleweight and the top fighter just happens to have had to vacate his title recently.

« Why doesn’t Pacquiao fight Marquez at a catch weight?