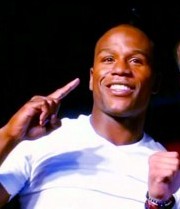 By Eric Thomas: The management for both Floyd Mayweather Jr. and Manny Pacquiao has reportedly agreed to terms for a fight that will likely be taking place on November 13th. According to Sportsillustrated.com, Top Rank promoter Bob Arum said that the deal has been agreed by Mayweather’s management side. However, Arum is still waiting for Mayweather to accept the terms and decide whether he wants to take the fight with Pacquiao. If Arum is saying that Mayweather’s management has agreed to the terms, it must mean that Mayweather’s wishes have been granted in terms of the contract negotiations.

That still doesn’t mean that there will be a fight between Mayweather and Pacquiao in November. Mayweather may decide he wants something different or it could be that Arum spoke too soon. Whatever the case, Arum has given until July 15th for Mayweather to agree to take the fight. If not, then Arum will look to use his Plan B backup opponent, which will be either Miguel Cotto or Antonio Margarito, both of which fight for Arum.

This is what Arum had to say on the matter: “This really depends, as I see it, on whether Mayweather wants to fight. By mid July, he’s either in or out. We’re not going to wait forever. We’re going to have a fight on November 13 and we would love it to be Mayweather. Nobody is under any obligation to fight this year. He [Mayweather] may need more time. When he is ready, we are prepared to do the fight.”

Previously, there was talk of this being Pacquiao’s last fight of his career. However, Arum isn’t giving up on the Mayweather-Pacquiao fight from being made if it doesn’t take place this time, leaving the window open for a fight next year in May between Pacquiao and Mayweather. This is interesting, and hopefully boxing fans will still want to see it.

If Mayweather and Pacquiao’s two management teams start negotiating early next year, it would be an entire year that they’ve gone back and forth trying to unsuccessfully put together a fight. By this point, there would be a real danger that a lot of the boxing fans might lose interest in the fight. Clearly, a lot of fans will still want to see it take place, but perhaps not nearly as many as when the two first attempted to negotiate a fight earlier this year.

Arum will go ahead and match Pacquiao up with Cotto or Margarito at the Cowboy Stadium, in Arlington. That fight won’t likely do any better than Cotto’s fight with Pacquiao last year. Seeing the same opponent matched up with Pacquiao probably won’t be a point of interest for the casual boxing fans. However, the diehard Cotto and Pacquiao fans will scoop it up regardless of how little of a chance Cotto has in the fight. There’s a chance, probably not a good one, that Pacquiao will fight Margarito next.

However, for that to happen, Margarito will have to get his boxing license back in the United States and right now that’s still an unknown whether he will get it back at this time. Either way, the Cotto-Pacquiao fight would likely bring in better numbers than a Pacquiao-Margarito fight, even though there would be little suspense about who would win the fight. Cotto was badly overmatched last time he fought Pacquiao, and nothing will probably change much in a rematch.