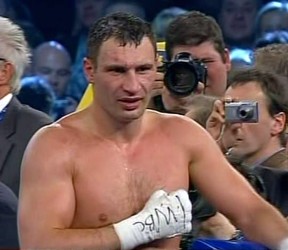 By Erik Schmidt: According to German news site Bild, World Boxing Council heavyweight champion Vitali Klitschko (39-2, 37 KO’s) won’t be facing former WBA heavyweight champion Nikolay Valuev (50-2, 34 KO’s). The two fighters were in negotiations for a fight, but Valuev’s management wanted $4 million for the seven-foot Valuev to fight Klitschko. The manager for Klitschko Bernd Bonte said that the fight with Valuev is “dead.” Bonte also said “Promoter [Don] King is crazy. His demands for Valuev are not acceptable.” Initially, Klitschko officered the 36-year-old Valuev $1 million to fight him.

However, when this was rejected, Klitschko upped his over to $2 million. This too was declined. Valuev’s promoter wanted $4 million and part of the TV rights, the article states. With this fight off the table, Vitali will look to line up a fight against number #2 ranked WBC heavyweight contender unbeaten former Olympic Cuban heavyweight Gold Medalist Odlanier Solis (15-0, 11 KO’s) next.

Solis first has a fight to take care of next month against Carl Davis Drumond on March 20th. But if Solis can take care of that fight without being upset or badly cut or injured in any way, he could be in the picture for Klitschko for his next fight. Solis, 6’1”, has excellent hand speed and good power. He stopped Monte Barrett in the 2nd round in October. If there’s a knock on Solis it’s his weight.

Since turning pro in 2007, Solis has weighed in the mid 250s for most of his fights. And recently, Solis ballooned up to a huge 271 for his fight against Barrett. Solis seems to carry the extra fat well, but he would likely be a much better fighter if he could fight in the mid 230s or possibly lower. While fighting as an amateur as late as 2005, Solis weighed a slender 200 pounds.

But two years later, Solis had put on well over 50 pounds. In fairness to Solis, some of the weight was added muscle, but a good portion of it is fat. Solis would have a tough time against Vitali if he makes the mistake of entering the ring against Klitschko weighing in the 250s or bigger. Solis would have a clear advantage over Klitschko in hand speed, but if Solis has problems landing it could be a problem for him.

Contender Kevin Johnson, who lost to Klitschko in December, was able to land cleanly with some nice shots during the fight. Johnson was able to accomplish this by throwing fast punches and connecting to the head of Klitschko. If Johnson can do that to Klitschko, then the faster Solis will likely be able to do it as well.

« The Experts on Testing for PEDs