Fury: “In a Couple of Years David Haye Won’t Stand a Chance” 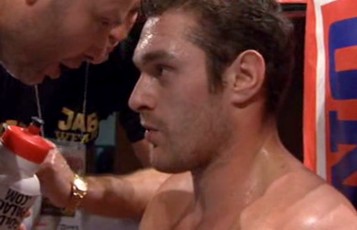 By Scott Gilfoid: I hate to see a fighter with tremendous talent underestimate himself, which is why I felt that the outstanding heavyweight prospect Tyson Fury (2-0, 2 KOs) was terribly underestimating himself by saying that he felt that David Haye wouldn’t stand a chance against him in a couple of years. I think the 6’8″ Fury is badly underselling his own ability, because from what I’ve seen of him and Haye, I think he could easily stop Haye right now without having to wait two long years to take him out.

Why wait two years? Haye will have likely been beaten by both Klitschko brothers by them, as well as a handful of other top tier heavyweights, which is why I think Fury needs to hit while the iron is hot. Put some pressure on Haye the same way badgered both the Klitschko brothers into giving him a fight, despite the fact that he had fought only two heavyweights in his entire career, neither of which were even approaching top tier in my view.

Fury called Haye a “Baby” on Steve Bunce’s Boxing Hour show on Setanta Sports News today, also saying Haye would “stand no chance at heavyweight.” Oh, I have to agree with Fury there as well. Once Haye gets past the Monte Barrett’s of the heavyweight division, he’s in danger of being knocked out by pretty much every one of the top 15 heavyweights.

I’m not talking just beaten, I’m saying he’s in danger of being knocked out. That’s not because Haye doesn’t have any ability because he’s a fighter with great boxing skills at times, but his chin is the weak link in the chain. He doesn’t seem to react well when he’s hit in the grill, and plus, his stamina isn’t all that great either.

With Fury’s devastating power in both hands, his huge size and his typically awesome body attacks, I see him taking apart Haye within two or three rounds. Haye would last as long as he could stay on the outside and move, but as soon as he stops and tries to fight it out, you can forget about it. He’ll get cornered and will disintegrate under the heavy shots from Fury and go down.

Haye will be able to get some shots before his ship is sunk but he’ll be blasted apart just the same. The problem is Haye is bringing a chin to the heavyweight division that problems taking shots against mid-sized cruiserweights. That’s not good. Perhaps this is why Haye has yet to face a heavyweight with power, because once he does he’ll be in serious trouble if he gets hit.

I think Fury needs to forget about waiting two years to fight Haye, because this guy is ready now. For anyone that’s seen Fury in his fights, you can see that he’s much more advanced than most fighters in the top 15, and you can throw out his young age of 20. This guy is much more advanced than his chronological age. He’s ready now to take Haye’s head off, and my advice is to go after him right now and put pressure on him to give you a fight. Haye is like a bulked up cruiserweight who looks out of his league against the bigger heavyweights in the division, as well as the smaller ones with power like Lamon Brewster.