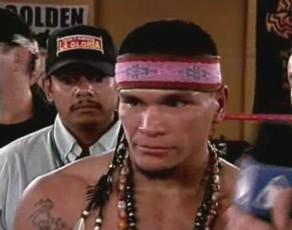 WBO super bantamweight Daniel Ponce De Leon (33-1, 30 KOs) destroyed a weaker Reynaldo Lopez (28-5-2, 19 KOs), stopping him in the 5th round on Friday night, at the Morongo Casino Resort & Spa, in Cabazon, California. De Leon pounded away at the thirty-three year old Lopez for five rounds until knocking him out with two consecutive left hands in the fifth, which sent Lopez to the canvas. He gamely attempted to rise but was only able to lift his head up off the canvas, because his body wouldn’t respond. Up until then, Lopez was seldom able to mount much of an offense of his own, mostly because he was so preoccupied with dealing with the incoming fire from the hard-punching De Leon, who rarely left off the gas pedal for more than a few moments of each round.

In rounds one though three, De Leon landed well with his hooks and straight left hand, which he threw constantly at the wilting Lopez. Even when he wasn’t landing cleanly, the punches had the effect of knocking Lopez backwards and keeping him from setting up his own attacks. Lopez was able to land an occasional hard shot of his own, however, due to De Leon being more focused on his own attack, forgetting all about worrying about any semblance of defense.

Lopez’s punch had little effect other than encouraging De Leon to fight even harder as he pressed forward with his two-fisted attack, giving very little breathing room for Lopez.

In the fourth round, De Leon threw many more punches than Lopez, who by this point looked like he was more of a sparring partner than a skilled opponent. De Leon spent better part of the round throwing exclusively left hands to the head. At the end of the round, De Leon landed two left hands that snapped Lopez’s head back.

In the fifth round, De Leon continued pounding Lopez without stop, hitting him with 1-2 combinations and straight left hands. After absorbing an enormous amount of punishment for most of the round, Lopez attempted a brief rally near the end of the round as he landed several shots. De leon answered back with two enormous left hands that dropped Lopez to the canvas. The referee Tony Crebs immediately stopped the bout at 2:39 of the fifth round.