By Craig Daly: Trainer Sugarhill Steward believes Tyson Fury might carry out his threat of slapping or popping Oleksandr Usyk if he sees him tonight at ringside at his fight against Derek Chisora.

Interestingly, Fury’s threat to slap Usyk is receiving almost as much attention as his fight with Chisora. That’s not a good sign.

It suggests that the boxing public doesn’t care about his fight with the 38-year-old Chisora and is more interested in discussing his potential next fight against the unbeaten Usyk. There’s a strong belief among fans that Fury is afraid of Usyk.

If Fury slaps or attempts to slap him, it will show the doubters that he has enough courage to do that, at least.

Of course, Fury would still need to fight Usyk to show he’s not dodging him out of fear of marring his record, which only has a couple of good names worth mentioning.

Sugarhill points out that Fury (32-0-1, 23 KOs) retired when he said he would earlier this year. So if Fury did that, he could carry out his vow of slapping the unified heavyweight champion Usyk (20-0, 13 KOs) in the mouth.

Usyk is pretty tough, and Fury should think clearly before he attempts to belt him after the fight.

If Fury recklessly throws a wild haymaker, he could be sorry he did so when Usyk blocks it and counters him with a head or body shot to put him on the canvas in front of the fans at Tottenham Hotspurs Stadium in London. 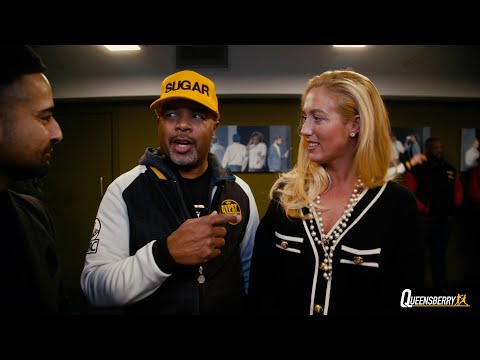 “Yeah, he said he was going to retire, didn’t he? Did he retire? Yeah, he did. So, there’s a good chance that he might slap him or pop him,” said SugarHill Steward to Frank Warren’s Queensbury when asked if Tyson Fury will carry out his threat to slap Oleksandr Usyk in the face if he sees him at ringside tonight at his fight with Derek Chisora at Tottenham Hotspurs Stadium.

“To my knowledge, Oleksandr Usyk got offered the fight for this date [December 3rd]. So if he wanted it so badly, maybe he would have been here tonight,” said Paris.

“He was offered to take the fight, but then just shows up anyways out of the blue,” said Sugarhill about Usyk.

“I’m not sure what’s going on there, but obviously, it does build a great fight,” said Paris Fury about Usyk being at ringside for Fury’s fight with Chisora.

“It’s the unified title. So if it does happen, it would be wonderful, but on the other hand, we see these things get offered and are meant to happen, but they don’t come up.

“It would be nice, but him [Usyk] ringside ain’t going to make no difference what Tyson does in the ring tonight,” said Paris.

Of course, Usyk’s presence won’t change what happens inside the ring.  The reason why it’s important for Usyk to be at ringside is to scout Fury and to begin hyping up a fight between him and Tyson.

For Usyk, the more pay-per-view buys, the better, and the way to accomplish that is to start building interest in the clash as soon as possible, beginning tonight.

“I don’t think he’ll be there. He’ll be too scared. He’ll stay out of the way,” said Paris when asked if Anthony Joshua will be at ringside tonight. “I would like to see that fight happen. Tyson has wanted it, and the fans wanted it.

“Whether it’s as credible as it was a year ago or two years ago, it’s not. Anthony has lost a few times, and Tyson has carried on winning, but but it would be a great fight for the fight fans.

“We don’t assume. When you assume, you make an a** out of you,” said Paris when asked if they “assume” Fury will win tonight against Chisora. “We know who is going to win.”

“Only two words,  knock out,” said Sugarhill about his prediction for Fury over Chisora.

“I do believe so. Tyson has fought Derek before, and I don’t think Derek has anything new to bring to the table. I think Tyson will do everything he’s done before,” said Paris.