Oleksandr Usyk vs. Tyson Fury “will happen next” – Bob Arum

As long as Fury doesn’t get in the way of the negotiations as he did when he foolishly bungled the talks for Anthony Joshua with dumb deadlines, Arum should be able to put together the match against Usyk (20-0, 13 KOs).

“I don’t see any reason why the [Oleksandr] Uysk fight with Tyson Fury can’t be made speedily without much trouble,” said Bob Arum.

“That fight will happen next unless Mr. Chisora lands his punch. Don’t discount Chisora. He has a tremendous punch,” said Arum. 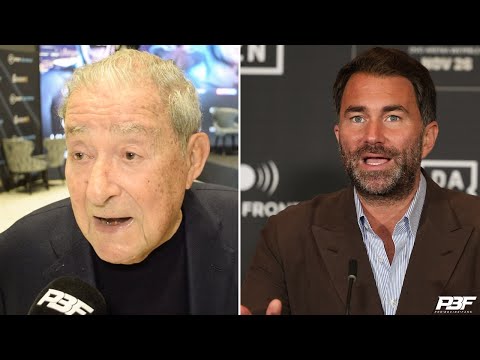 “They’re crazy. I’m giving Chisora a hell of a chance. I remember him fighting Usyk, and that was life or death for Usyk. Look how Usyk handled Joshua,” said Arum to Pro Boxing Fans.

“We all want to make that fight. Tyson, myself, Frank Warren, George Warren, and the Usyk people. We didn’t want to start negotiations prior to this fight [Fury-Chisora 3] on December 3rd, but on Monday, we’ll hit the ground running, and hopefully, we’ll get that fight done in the next two weeks.

“I think it does well. There’s nothing like the UK fight fans, and they know they’re going to see an interesting fight and an interesting card. That’s what people want.

“They want the entertainment. That price is a lot less than it is in the United States for pay-per-view,” said Arum about the criticism of 26.95 for the pay-per-view price in the UK for the Fury vs. Chisora III fight.

“So, no, I think this [Fury vs. Chisora] is a very, very competitive fight. Of course not,” said Arum when asked if he believed Fury would return to the ring when he announced his retirement earlier this year.

“I’ve been around this sport for 60 years, and there are certain fighters, once a big fight is over, they can’t wait to announce their retirement. You give them a few weeks, and they change their mind. They love, and they love competing,” said Arum.


« Bob Arum reveals Haney vs. Lomachenko close to being finalized

Usyk to attend Fury vs. Chisora 3 on Saturday in London »