Oleksandr Usyk is “too small” for Tyson says John Fury

By Charles Brun: John Fury says the 6’4″ Oleksandr Usyk is “too small” for his son, Tyson Fury, and he will not defeat him when the two fight in early 2023.

As slow and flabby as Fury (33-0-1, 24 KOs) looked against journeyman Derek Chisora last weekend, Usyk will have an excellent chance of outboxing him as he did against Anthony Joshua on two occasions.

Fury’s fighting style looks like garbage at this point in his career. He’s picked up a lot of bad habits since joining with American coach Sugarhill Steward, and he no longer boxes like used to before hooking up with him.

Fury’s game consists of throwing a slow, lazy right hand followed by a clinch and leaning. He’s so predictable at this stage in his career. It’s simple Simon stuff.

Joshua is faster and more powerful than Fury in every department, and Usyk easily avoided his shots to win a pair of 12 round decisions.

Most fans would agree that Fury is too slow & stilted to defeat Usyk, and he will not beat him by clinching & leaning.

John believes the 6’7″ Joe Joyce poses a bigger threat to beating WBC heavyweight champion Usyk (20-0, 13 KOs), despite losing to him in the World Series of Boxing. 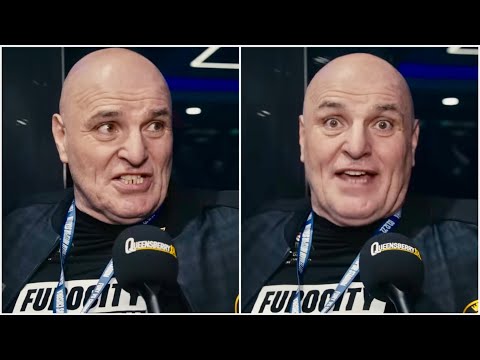 “They’re not going to beat Tyson. The ringcraft, the skill, the determination, the strength, the intelligence, and everything he does disguises it well,” said John Fury to Frank Warren’s Queensbury. “He’s very effective. I know everything he’s doing and ain’t doing.

“I can’t see him getting beat. I seen Usyk at the side of the ring. He’s just too small. I know he’s a great little fighter, but a great big em will beat a great little em.

“But if it’s Joe Joyce, we’ll adapt the plan for Joe Joyce; we’ll train for Joe Joyce, and Joe Joyce will come like the rest of them to Tyson Fury. But if he wants it, he can have it, and good luck to him.

“He’s a big strong man, Joe Joyce. Give him his shot. He’s up for it; give it to him. Like anybody else, get up in the ring. It shows that he wants it. You know what the fans want. It’s all about the fans.

“I’ll make sure Tyson fights all these people because I say, ‘You’re that good. I said, ‘Don’t write Derek Chisora off. He’ll give you a better fight than Dillian Whyte,’ and he did.

“He got a good ten rounds there, Tyson. He needs to be under the lights,” said John Fury. “The people that turned out, the fans, 60,000 in these economic crisis times when people can’t pay the bills and the cold weather,” said John about the crowd that came out for the Fury vs. Derek Chisora fight.

Whether it was 60,000 or a far smaller number of fans that showed up for the fight is questionable. There were tons of empty seats inside the Tottenham Hotspurs Arena for Fury vs. Chisora 3. It wouldn’t be surprising if there were only 25,000 fans that attended the fight. It’s unclear where the 60,000 tickets sold stuff came from.

“I don’t know if he’s big enough to challenge Fury if Fury is really up for it, but when it comes to ability, Usyk is the best heavyweight in the world by a country mile. So I go Usyk because I’m an Usyk fan-boy,” said George Groves to Boxing UK, choosing Oleksandr Usyk to defeat Tyson Fury.