Josh Warrington vs. Luis Alberto Lopez: Will headbutts come into play on Saturday?

By Charles Brun: Josh Warrington (31-1-1, 8 KOs) defends against his mandatory Luis Alberto Lopez (26-2, 15 KOs) in the first defense of his IBF featherweight title this Saturday, December 10th, in a headliner on DAZN at the First Direct Arena, in Leeds, England.

Warrington vs. Lopez will be shown live on DAZN at 4:00 p.m. ET this Saturday, December 10th.

The 29-year-old Luis Lopez has the better skills and overall talent to easily win this fight, but with the possibility of fight-ending accidental head-butts that could come into play, he may come out the loser.

Lopez is fighting in Warrington’s backyard in Leeds, and he will be royally up against it with the crowd.  Apart from that, Lopez is the better fighter when you remove head-butts and the fight’s location from the equation.

The interest in seeing Warrington fight against would be higher for many boxing fans if he were doing the right thing, facing Mauricio Lara.

There’s a lot of baggage left behind from his ninth round knockout loss and a very, very questionable second round technical draw against the Lara from last year.

How Warrington could walk away from his second fight with Lara without rescheduling for a third fight to clear up the controversy is difficult to understand. 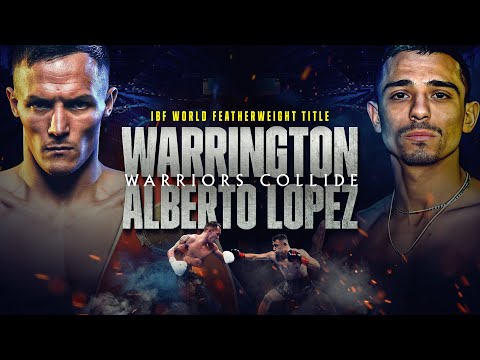 As far as I could tell, Warrington came close to winning NONE of the two rounds in his rematch with Lara in September 2021, and he didn’t deserve a second round technical draw after Mauricio was badly cut after Josh rammed heads with him twice to end the fight in Leeds.

Lara landed the more brutal, cleaner shots in both rounds against Warrington, and there’s no way that you could score that fight as a draw unless the judges were counting head-butts as punches landed by Josh.

In a short space of time, the 32-year-old Warrington has gained a reputation for being a fighter that accidentally rams heads with opponents, resulting in cuts.

We saw that happen in Warrington’s last two fights against Kiko Martinez and Mauricio Lara. You can only wonder what the results of those fights had been if not for the accidental head-butts that caused cuts to those fighters.

“Get that unification, to get that big fight against another champion that I’ve been wanting for such a long time,” said Josh Warrington to Boxing Social. “If I don’t get the shot against the mandatory [Luis Alberto Lopez], then what the f**k do I have to do?”

It’s unclear how many new subscribers the Warrington vs. Lopez event will bring in for DAZN. While this event might be playing out well with British boxing fans, it’s not one that U.S fans are eager to see.

You can argue that the only reason American fans would want to see Warrington again is if he were taking on Mauricio Lara in a neutral venue with quality judges, a good referee or talents like Rey Vargas, Leo Santa Cruz, or Gary Russell Jr.

If Warrington is involved in repeated head clashes with his opponents, he needs to be docked points because these accidental head-butts are happening too often, and they’re playing apart in his fights.

There’s not a lot of buzz on social media this week for Warrington’s fight with Lopez, and it’s not surprising. If you’re the top brass at DAZN, you got to be a little concerned about the lack of interest from American fans in the Warrington-Lopez fight.

Again, Warrington is okay if he’s fighting Lara, Santa Cruz, Vargas, or Russell Jr, but aside from those fights, there’s not great interest in seeing him face Lopez, Leigh Wood, Kiko Martinez or Kid Galahad.