By Chris Williams: David Avanesyan says he’s going to “shock the world” on Saturday night by defeating the unbeaten WBO welterweight champion Terence Crawford in their bout on December 10th on BLT Prime pay-per-view at the CHI Health Center in Omaha, Nebraska.

A defeat for Crawford would be catastrophic for his 14-year professional career, wrecking his plans for lucrative fights against Errol Spence Jr and Jermell Charlo. Even if Crawford were to avenge the loss to Avanesyan, it would take him ages to work his way back to where he is now, and the way he would accomplish that is by swerving the young lions Jaron ‘Boots’ Ennis, Vergil Ortiz Jr, and Rashidi Ellis. 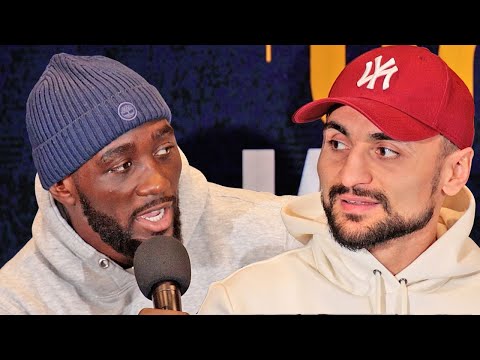 Losing to Avanesyan would mean that Crawford would need to waste one of his few remaining fights on a rematch, and it obviously wouldn’t be a sure thing that he wins.

If Avanesyan beats the 35-year-old Craword once, there’s a good chance he could do it again. It would be a case of age & inactivity having caught up with the Omaha, Nebraska native.

For hardcore boxing fans that have had doubts about Crawford since he moved up to the 147-lb division in 2018, they would see it as a situation where he finally got found out after fighting six mediocre welterweights in the last four years.

What the casual fans don’t know is that promoters do a great job of making their fighters look better than they are by the way they match them against weak opposition to keep them from being exposed.

With Crawford, it could be all smoke & mirrors. He has had the good luck of being matched with utter care by Top Rank until he decided to go his own way, and yet he’s still choosing not to fight the elite-level opposition.

“I’m very focused and have been since day one strictly on Avanesyan,” said Terence Crawford at the final press conference on Thursday. “We know what he brings to the table, but we’re going to elevate it to a higher level. This Saturday, we’ll be victorious and have fun doing it.”

“I really can’t look at too much of who [Avanesyan] fought and how they fought each other.

“When [Avanesyan] and I match up, we’ll make our adjustments on the fly, and we’re going to do what we do best, which is shine,” said Crawford.

“I’m not only here to win this fight decisively but to shock the world,” said Avanesyan.  “Come Sunday morning, the news will spread that I raised the belt and shocked the world.”

“It’s real likely. Once he conquerors 147 like he wants to, 154 is next,” said Crawford’s trainer Brian ‘BoMac’ McIntyre to Fight Hub TV about a possible direction for Terence Crawford if he defeats Avanesyan and IBF/WBA/WBC welterweight champion Errol Spence Jr.

“That’s a real competitive fight. He’s a power puncher too,” said BoMac about Crawford against undisputed junior champion Jermell Charlo. “They [Jermell & Spence] pretty much fight the same, a little bit. You can tell they got the same trainer.

“Probably when he retires,” said BoMac when about boxing fans finally giving Crawford recognition for his greatness. “‘Man, I miss Terence. I want to see Terence fight again.’

“‘Well, you should have thought about that when you were criticizing him when he was fighting. Now, he’s retired and gone and rode off into the sunset.’ He’s cool with it [criticism]. He hears it all the time. It never fails,” said BoMac about the criticism Crawford receives from fans.


« Jermell Charlo defends against Tim Tszyu on Jan.28th on Showtime in Las Vegas