By Dan Ambrose: Dmitry Bivol is focusing on his legacy over money with his decision to target IBF/WBC/WBO light heavyweight champion Artur Beterbiev over a lucrative rematch against Canelo Alvarez.

Bivol (21-0, 11 KOs) believes the money will eventually come with him capturing belts and beating the best fighters he can. However, Bivol could be avoided if he keeps winning the way he has.

Some would say that Bivol is already being avoided because Canelo has been dragging his feet about taking the rematch since he was whipped by the talented  WBA 175-lb champion last May in Las Vegas.

Bivol focuses on legacy over money

“If you are motivated only by money, you’ll never achieve anything,” said Dmitry Bivol via SI. “It’s stupid. You have to love your job. If you are an actor, you have to have a dream to get an Oscar, not just to earn money.

Canelo’s decision to try and beat Bivol by throwing single shots doomed him from the start. Whether it was Canelo’s idea or his trainer Eddy Reynoso’s to try and defeat a combination puncher like Bivol with that game plan is unknown.

Canelo & Reynoso should have researched and noted that Bivol was a combination puncher and adjusted their game plan.

For the boxing fans that say Canelo had no business at 175, the fact is that the 168-pounders, David Benavidez & David Morrell, are the same size as Bivol and bring just as much trouble. 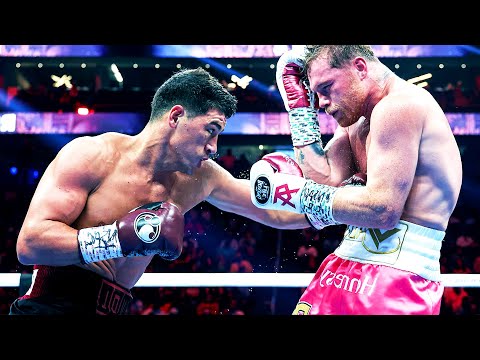 Canelo chose to move to 175 to avoid Benavidez & Morrell, and he discovered that he was just as overmatched against Bivol as he would have been having he stayed at 168 and fought those guys.

If Canelo returns to the division and stays there, he will be trounced by Benavidez and Morrell in the same way he was by Bivol because he’s not good enough of a fighter to beat well-schooled talented fighters.

Without controversial decision wins, Canelo’s career would be on the rocks already after his fights with Gennadiy Golovkin, Erislandy Lara, and Austin Trout.

Alvarez passed up on the rematch with Bivol last September to face his old past prime nemesis Gennadiy Golovkin in a trilogy fight way past its sell-by date.

If this fight was the equivalent of milk, it was spoiled, but Canelo still went in that direction, which tells you that he’s avoiding Bivol like the plague.

With Canelo no longer an option due to his decision to take the rematch, Bivol is focusing on going after Beterbiev (18-0, 18 KOs) next year. That fight will be huge, a battle of two unbeaten light heavyweight talents for the 175-lb supremacy.

Unless Top Rank says otherwise, it’s quite possible that we’ll get two to three fights between Bivol & Beterbiev. It’s that type of fight. Top Rank promotes Beterbiev, and they might choose to protect him if he gets schooled by Bivol.

It’s an excellent idea for Bivol to win all the belts at 175 because it’s the best thing to come from that weight class. With the light heavyweight division being an ignored weight class, the only fight that makes sense for Bivol is against Beterbiev. It helps that all the titles will be on the line for the contest.

Eventually, when David Benavidez moves up to 175, that’ll bring more excitement to the weight class. For the 175-lb weight class to take off, guys like Caleb Plant, David Morrell, and Demetrius Andrade will need to move up.

Gervonta Davis says “I am not a monster,” denies striking woman »