Fury (32-0-1, 23 KOs) has arguably hurt what little popularity he had left by choosing #14 WBC fringe contender Chisora (33-12, 23 KOs) rather than a decent fighter that would give the fans their money’s worth.

The promotion for this godawful fight has nowhere, as Fury has barely lifted a finger to hype it, and Chisora has sounded so tired during his interviews. The 38-year-old Chisora’s speech is so tired-sounding, as if it’s all he can do to utter a few syllables.

Chisora’s slow response time when asked simple questions is disturbing, as it makes you wonder if he’s taking too many beatings during his career.

Unless Fury takes it easy on Chisora, this fight is going to be over almost immediately, similar to Tyson’s last title defense against the shot-looking Dillian Whyte last April.

After that mismatch, Fury should have picked a good contender because the fight was a dull affair with a lot of mauling by Tyson until he shoved Whyte to the canvas in the sixth.

It’s incredibly disturbing that Fury chose Chisora, of all fighters, to defend against because he shouldn’t even be ranked in the top 15.

In an interview this week, Chisora claimed that he’s a better fighter now than the last time he fought Fury in 2014.

If you take the time to look at Chisora’s recent slow-motion performance against 41-year-old Kubrat Pulev last July and compare it to how he looked against Fury in 2014, it’s two different people.

Chisora was much faster and more active then than now, and he was horrible in that fight.

“I need a goal. I need a target to aim for,” said Tyson Fury to This Morning about why he chose to defend against Derek Chisora, “We tried for the Usyk fight; we tried for the Joshua fight. It didn’t happen, so we had to take who was available. Chisora stepped up to the plate.

“Congratulations to Derek. He’s a hell of a fighter, and I’m looking forward to the challenge.”

“It was going to happen anyway because I was already told that it would happen,” said Chisora to BT Sport Boxing about the trilogy fight with Fury.

“Training-wise, it’s the same. I can’t tell you, ‘After six weeks of training, I had the best sparring ever.’ No, I cannot find any bigger guys that can move around like Tyson.

“If there were any big guys that could move around like Tyson, they’d be fighting Tyson. It’s difficult to try and find people that can stay in the ring with me with the pressure that I’m putting on them.

“Limited pressure,” said Chisora when told that he’ll need to bring the pressure to Fury. “The whole point is to try and limit the punches he throws. Sustain it and go with it.

“Winning or losing, there’s only one place that you’re going to go afterward, and that’s home. Even if you win the lottery today, where are you going to go first?

“They’re all monstrous. He’s a good fighter; I’m not going to lie to you. As long as you don’t mess around. He’s good at what he does. I’m good at what I do as well, so we’ll see.

“I think he was a better fighter when I last boxed him [in 2014]. Yeah, I’m better now. The last time I fought him, he was better. He was good. He was on point,” said Chisora. 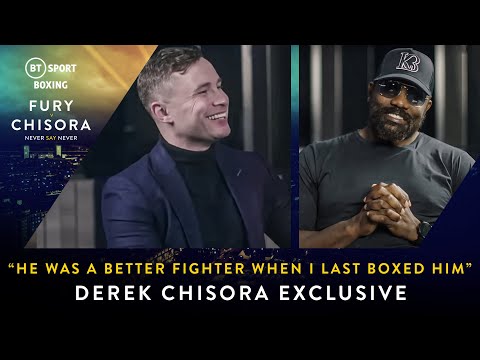