Teofimo Sr attributed Lomachenko’s subpar effort to the ring rust that had accumulated during his year out of the ring while in the Ukraine war with Russia.

The problem that Lomachenko had is that he was fighting a much bigger fighter in, 26-year-old Jamaine, and he was getting jabbed hard from the outside.

Jamaine’s jab is almost as good as Haney’s, but his hand speed, power & inside game is superior to his.

What ultimately cost Jamaine the fight was how he emptied his gas tank in the second half of the contest, allowing Lomachenko to rally for the win against his tired-out opponent. Without Jermaine tiring, he would have won.

“I think Lomachenko dominated the whole fight. I had him losing a couple of rounds, not too many, and I think the unanimous decision was good,” said Teofimo Lopez Sr to Fighthype about Vasyl Lomachenko’s win over Jamaine Ortiz last Saturday night.

“Not at all,” said Teofimo Sr when asked if Lomachenko looked like the same guy that fought Teo in 2020.

Lomachenko was better in some respects last Saturday than he was for his fight against Teofimo Jr because he was throwing punches against Ortiz. When Loma fought Teofimo, he didn’t let his hands go until the second half of the fight, and by then, it was too late for him to win.

“I don’t know. The way I see it, he was a little bit rusty,” said Teofimo Sr on whether he would favor Lomachenko over Shakur Stevenson or Devin Haney.

“I mean, you can’t blame him. He hasn’t been fighting for a while. So you know, with the Ukraine thing and all that stuff that was happening in Ukraine, I think he could still beat these guys, even with his performance tonight.

“I saw him winning most of the rounds. I think he can come back and do good,” said Teofimo Sr. 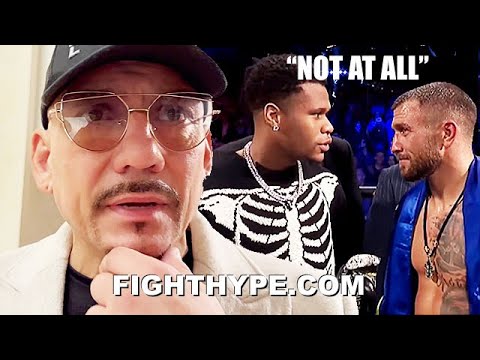