By Allan Fox: Shakur Stevenson says the ONLY reason Gervonta ‘Tank’ Davis has suddenly started mentioning his name on social media is because he’s got two fights lined up against Hector Luis Garcia and Ryan Garcia in 2023.

The 2016 Olympic silver medalist Shakur (19-0, 9 KOs) says he feels he can beat Tank, and he wants to face him as soon as possible to prove that to the world.

Whether Stevenson will get the opportunity to fight the 28-year-old Gervonta is the big question. Let’s be real. It took this long for the nine-year pro Tank to fight his first mega-fight against Ryan in April.

Gervonta never fought Vasyl Lomachenko or Teofimo Lopez when they pushed for a fight against him.

Also, Tank STILL hasn’t fought Devin Haney despite the unbeaten four-belt lightweight champion calling him out 24/7 for a unification fight.

“He knows I’m coming. He feels the energy that I’m coming,” said Shakur Stevenson to Fighthype.”Now, he’s trying to raise his energy. I don’t really give too much about what he has to say.

“I don’t mind telling somebody they’re a good fighter, but in the back of my mind, I feel like I can beat them. That’s how I feel about him,” Shakur said about Tank Davis. 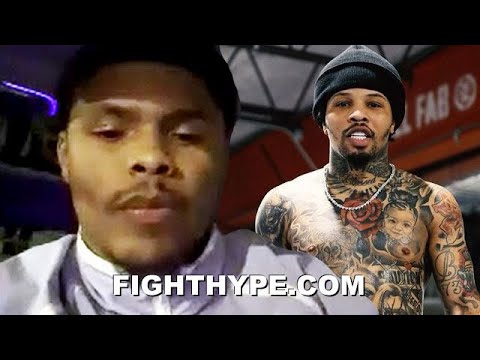 “I feel like he’s only saying that because he’s got fights lined up [against Hector Luis Garcia and Ryan Garcia in 2023],” Stevenson said about the next two opponents Gervonta has lined up for the first half of next year.

You got two fight dates lined up, and you can say whatever you want about somebody else that’s irrelevant to the people that you fighting.

“I’m not on the list of the people he’s fighting. He started talking about me because he’s got fights lined up. He’s got two fights lined up in January or April. Tell him to have that same energy after those fights.

“Even with the sparring, this dude is a cap; this dude is a liar. This dude is going on social media lying,” Shakur said about Tank Davis. “When did you ever do in sparring against me? Richardson, somebody that be with him, ask him.

“He was there for every sparring session we had. He never cracked me. Maybe he landed a good shot, but he never did I feel a shot. Never did he buzz me, and never did he hurt me.

“I landed good shots on him too. So I’m confused. When he’s talking about how he cracked me, he’s making up stuff right now,” said Shakur.


« How to watch Tyson Fury vs. Derek Chisora III on PPV

Chris Eubank Jr tells Conor Benn: “own up and ask for forgiveness” »