Minneapolis’ adopted son and rising phenom David Morrell, Jr. showed flashes of his superstar potential, bloodying and battering mandatory challenger Aidos Yerbossynuly over 12 rounds before closing the show in emphatic fashion to defend his WBA Super Middleweight Title Saturday night via KO in the main event of action live on SHOWTIME from The Armory in Minneapolis in an event presented by Premier Boxing Champions.

“Thank you everybody in Minnesota for coming to support me,” said Morrell, who predicted an eighth round KO during Thursday’s final press conference. “Thank you to my family, my team, everybody. I’m so excited, man. I told everyone at the press conference that the fight is mine. I saw he was hurt at that moment and then the results came in, that knockdown came. A knockout is a knockout, so if it’s in the eighth or 12th round, it’s a knockout anyways.”

Ahead 110-99 twice and 108-101 entering the final round, Morrell (8-0, 7 KOs) wasn’t satisfied with just winning on the scorecards, as he pressed to extend his four-fight KO streak and put an exclamation mark on his performance. With just forty seconds left in the fight, Morrell did exactly that. The 24-year-old Cuban, who now lives and fights out of Minneapolis, flattened Yerbossynuly (16-1, 11 KOs) with a straight left hand followed by a right hook, sending the lively crowd at The Armory into a frenzy. It was the second time in the round that Yerbossynuly was dropped after a straight left hand sent him to the canvas for the third time in his career.

In a fight where over 1,100 combined punches were thrown, the southpaw Morrell, who showed a diverse offensive arsenal and also dazzled with his flashy footwork and defense, landed 39 percent of his punches and 47 percent of his power punches. He landed 64 more jabs and 91 more power punches than the game Yerbossynuly, who showed both skills and guts. Morrell’s 54 body punches landed was also a career-high.

“I don’t think anyone is scared of me, I respect everyone in this division,” said Morrell, looking ahead to what could come next. “I do know they are aware of me. They know exactly who David Morrell Jr. is and that he’s coming for it all. I want David Benavidez, but I don’t care. I’m ready for everybody.”

Following the bout, Yerbossynuly was taken to Hennepin County Medical Center for evaluation.

In the co-main event, late replacement Brian Mendoza (21-2, 15 KOs) seized his opportunity and delivered a stunning fifth-round KO over former unified world champion Jeison Rosario (23-4-1, 17 KOs) in a performance that Mendoza described as career-altering. The 27-year-old Rosario announced his retirement following the fight. 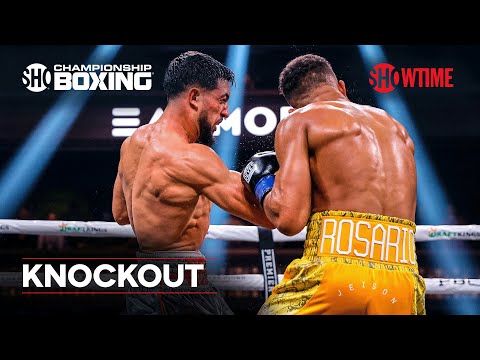 “They thought I was a fill in,” said the 28-year-old Mendoza, who took the fight on ten days’ notice after Yoelvis Gomez suffered an injury. “I’ve been in the gym for seven months straight since I fought on March 26. This was anything but a last-minute call.”

Thirty-five seconds into the fifth stanza, Mendoza landed a vicious right uppercut that sent Rosario to the canvas for the second time in the fight. Rosario stumbled when attempting to rise, prompting referee Mark Calo-Oy to put a stop to the action.

In just five rounds of work, Mendoza was able to land 25 punches to the susceptible body of Rosario. In the second round, Mendoza landed a left hook to the body, causing Rosario to belatedly drop to a knee. This was the fourth time in Rosario’s career that he was dropped with a body shot.

“You watch tape on the guy, and you see what they’re open to,” Mendoza said. “I saw an opening and I went for it. I was just beyond ready for anything. Those are the adjustments you work on in camp. He kept slipping the straight line I was throwing. He was ducking and I was like, let’s see if this works. I sat on the punch and let it go, those were the instincts I worked.”

Tonight’s defeat marked the end of a splendid career for Rosario, who captured the WBA and IBF 154-pound belts by stopping Julian Williams in one of 2020’s biggest upsets.

“I think it’s time to say goodbye,” Rosario said. “I’m not fighting anymore. I’m going to retire. I have accomplished a lot, and it was good, but my career stops here. The most important thing is that I’m still healthy. I feel bad that I couldn’t give the Dominican people the result they hoped for, but I love you all and I thank you for all the support through the years.”

It was all Fiodor Czerkaszyn (21-0, 13 KOs) in the telecast opener, a fight in which the talented and undefeated middleweight raised his stock even further with an impressive unanimous decision over seasoned veteran Nathaniel Gallimore (22-6-1, 17 KOs). The judges scored the fight 98-92 and 99-91 twice.

“I felt in this fight I controlled him,” said the Ukrainian-born Czerkaszyn, who now fights out of Poland. “He is very fast and he wanted to catch me with a hard punch, but I wanted to feel the distance. It’s my style. I like to punch like that, fast and sometimes throw a strong punch.

Making his SHOWTIME debut, Czerkaszyn made a good first impression by displaying a wide range of skills during the course of the 10-round destruction. The 26-year-old landed 53 percent of his power punches and held a sizeable 59-6 advantage in body punches landed. Coming off a career-long layoff of 16 months and making his debut at 160 pounds, Gallimore didn’t pose enough of an offensive threat, landing just 24 percent of his power punches, but showed heart and toughness to last all 10 rounds.

“I started a little slow in there tonight,” said the Jamaican-born Gallimore, who now fights out of Chicago. “I couldn’t get my combinations going. He outworked me and they gave him the fight. That’s just how it is. It wasn’t my night. He never had me hurt in the fight. He did hit me with some good shots, but I wasn’t hurt or worried at any point that I couldn’t continue.”

With two consecutive wins in the United States after fighting exclusively in Europe, Czerkaszyn is eager to keep the momentum going stateside.

“I’m ready for the big stage,” he said. “Give me world title preparation, because I only had three weeks before this fight. But this was my chance. This is my step forward. I will be back.”

It was announced on tonight’s telecast that a high-stakes matchup of undefeated fighters will round out the network’s successful 2022 boxing lineup. On Saturday, December 17, lightweight contender Michel “La Zarza Ali” Rivera (24-0, 14 KOs) will take on Derrick James-trained Frank “The Ghost” Martin (16-0, 12 KOs) in a 12-round lightweight title eliminator bout in the main event of a SHOWTIME CHAMPIONSHIP BOXING® telecast in an event presented by Premier Boxing Champions. Additional details on the card will be announced at a later time.

Dmitry Bivol could fight Canelo for undisputed at 168, then Beterbiev at 175 »