David Benavidez on Caleb Plant: “I’m going to get a stoppage”

Benavidez (26-0, 23 KOs) wants to knockout Plant (22-1, 13 KOs) and land many shots in the process, but it might be harder than he thinks to put hands on him. Plant is a mover, and he’s going to use the entire ring, and not stop for more than a brief instant to throw his shots.

While Canelo Alvarez was able to wear down and stop Plant in their fight last year, he did it because Caleb felt comfortable staying stationary because his work rate was low, and he was throwing single shots.

Benavidez is a combination puncher with fast hands and a high output. Because of that, Plant is going to be less willing to stand and trade because he’s not going to want to get machine-gunned and stopped.

What we’re likely to see is Plant hitting & running all night, looking to steal the rounds with his shoeshine and limiting the flat-footed Benavidez’s offensive output to that of a trickle.

“I feel like all the work I’ve done over the years is finally paying off. Now we’ve got a huge fight, my first pay-per-view fight, and it’s going to be a really good fight for boxing fans,” said David Benavidez to Fighthype about his March match-up against Caleb Plant.

If Canelo had been willing to fight Benavidez a long time ago, he could have gotten a bigger fight a lot earlier than now. Obviously, Canelo has chosen to swerve Benavidez, which has slowed his progress.

It’s still doubtful that Canelo will fight Benavidez, even though this is a WBC 168-lb title eliminator. By the end of next year, Canelo will have fought Dmitry Bivol for the second time, and if he loses that match, it’s possible that he’ll retire rather than stay around to wind up as food for Benavidez and David Morrell to tear apart.

“This is probably going to be one of my best fights of my career so far. The main goal for this fight is to put a beating on Caleb Plant. I’m not going to go out there and do anything that I haven’t done before.

“I’m going to use that bad blood for more motivation to go out and get the job done. I know it’s not going to be an easy fight. Caleb is a good fighter. He’s a defensive fighter, but I feel like overall, I’m stronger, faster, I think better, and have more punching power.

“I already knocked his new coach’s fighter out before. I kind of have my blueprint already. Just being the person that I am, I land close to 45, 50% each fight, and I’m an aggressive fighter. Once you get a fighter that throws close to a 100 punches per round and lands close to 50% of them every round, it’s very dangerous.

“I feel like I have a lot of momentum. I have five straight stoppages. Everything has been going good. I feel really motivated. I’ve been training for three months, and I still have four months to train.

“This is definitely going to be the performance of my life and the training camp of my life.

“I definitely want to make a statement. I’m not Caleb Plant’s friend, and I don’t want to be his friend. So, I’m really looking to beat the s**t out of him. That’s the only thing I want. I don’t care about anything else.

“I’m really excited like I said. This is going to be a really big fight for me and for my fans. Everybody that has followed me and everybody that has supported me, I just want to prove them right.

“I’m going to put 100% into this fight and this training camp. It’s definitely going to be a great show to watch.

“A lot of people say they took it as an offense,” said Benavidez about Plant showboating after his knockout victory over Anthony Dirrell by pretending that he was throwing dirt onto his body as he lay unconscious on the canvas in the ninth round.

“I feel like he was showing the true nature of a boxer. That’s what we’re going for. If people think it’s too much, then I don’t think people should support boxing and watch knockouts because people grow crazy when they see a knockout and see someone go to the floor.

“But once they see someone doing some stuff like that, ‘Oh, it’s too much. You can’t be doing that.’ That’s not how it is. That’s just the savage nature of a boxer. He’s going to try and knock somebody out, and when he does, and sometimes when there’s a lot of heat on a fight like that, sometimes s**t like that happens.

“Maybe, especially because it’s going to be pay-per-view. I think we’re going to be trying to sell this fight a little bit more,” said Benavidez about whether it’ll get ugly during the press conferences between him and Caleb like it did when Plant fought Canelo.

“It’s not even selling it. We just don’t like each other, especially having him in front of me. It’s high stakes for this fight. It might get ugly. We’ll see what happens.

“If you look at Caleb Plant’s last fight with Anthony Dirrell, it’s the same s**t. They’re really trying to box, try to use the ring,” said Benavidez about what Plant’s new trainer Breadman is having him do in his fights.

“I think where Anthony Dirrell messed up a lot is giving Caleb too much time to think because when you pressure Caleb a lot and you give him a lot of time to think, he doesn’t do too good, as you see with Canelo and Caleb Plant.

“Anthony Dirrell, he was giving him way too much time to think, letting him do whatever. He was trying to counter him every time Caleb would throw something. I feel that was the wrong game plan.

“He had some success in the beginning rounds, Anthony Dirrell, but he was giving him too much time to think. But with me, I’m completely different. I can box from the outside, but I want to go in there and break the fighter down.

“I think that’s going to be the main difference. His trainer is good, but I don’t think he’s going to give him too many more tools to do. We’ll just see what happens.

“That’s definitely something we’re going to try and work on more, defense because I can do it. I’ve done it my whole boxing career. Everything that people say I can’t do if feel like I’m going to show in this fight because I definitely want to shut everybody’s mouth.

“A lot of people that say I don’t have defense and that I’m flat-footed. I feel like this fight is going to make them eat their own words.

“I think it’s great,” said Benavidez when told that the WBC has confirmed that the winner of his fight with Plant will be the mandatory to Canelo’s WBA 168-lb title. “I feel like we’re finally getting some justice with the WBC.

“I feel like this went into one big storm because after this. I mean, the motivation going into this fight is already big and having that be the prize after this makes it ten times bigger.

“As I said in my head, I’m motivated right now. I have a clear view and clear focus. I have tunnel vision right now. As I said, it’s going to be a great year. I’m excited.

“I’ve heard the last week of February to the beginning of March,” said Benavidez about when he’ll be fighting Plant. “February, I don’t think it’s going to be that one because they already told me.

“I think Showtime, but I really don’t want to say too much because I’m not 100% sure. I’m really excited because when I think of myself when I was little, this is everything that I wanted since I was a little kid. Now that I’m here, I’ve got to put the work in.

“I’ve already put the work in, but now I have to work even harder. I feel like this is everything I’ve dreamed about and this is what dreams are made of. I’m definitely excited. This is going to be a wild ride,” said Benavidez about his fight against Plant. 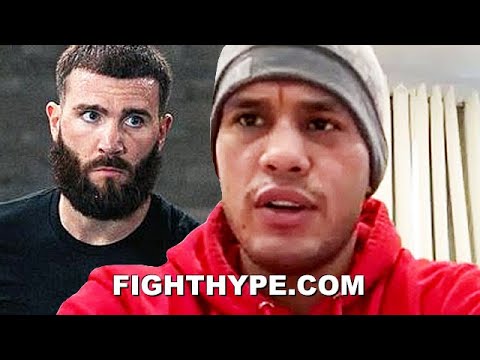 Jose Zepeda vows to battle Regis Prograis to the end »