By Brian Webber: Eddie Hearn has revealed that Jermaine Franklin is a possible opponent for Anthony Joshua’s next fight in early 2023 after his sparkling performance last Saturday night against Dillian Whyte in London.

It’ll reflect badly on Joshua (24-3, 22 KOs) and Hearn if Whyte is selected as his next opponent because there’s too much taint that is following him in the aftermath of what fans feel was a hometown decision over Franklin.

It would look good on Hearn’s part if he did the right thing by giving Franklin the chance to get life-changing money against Joshua rather than allowing the already financially rich Whyte to get the shot at AJ following his controversial win.

There’s been a tremendous backlash from fans over the results of the Whyte-Franklin fight, with many people feeling that Franklin (21-1, 14 KOs) deserved the victory, not the hometown fighter Whyte (29-3, 19 KOs), who was beaten to the punch the entire fight.

Despite Hearn’s best efforts to whitewash the results of the fight by saying that Whyte swept the championship rounds, boxing fans believe that Franklin was outright robbed by the judges and should have had his hand raised.

Hearn sounded like a broken record, repeatedly talking about how if there was another minute left in the 12th, Whyte would have knocked out Franklin. That kind of magical thinking didn’t change what happened inside the ring, unfortunately. The fact is, Whyte looked VERY old and was dominated by a younger, faster, and technically superior Franklin.

“He’s [Joshua] looking at Dillian and Franklin as potential next opponents,” said Eddie Hearn to Behind The Gloves after Dillian Whyte’s questionable victory over Jermaine Franklin last Saturday night.

“Even Jermaine Franklin might be in the hat after that performance,” said Hearn about a potential opponent for Joshua’s next fight. “Otto Wallin. Dmitri [Salita] is trying to get me to fight him. 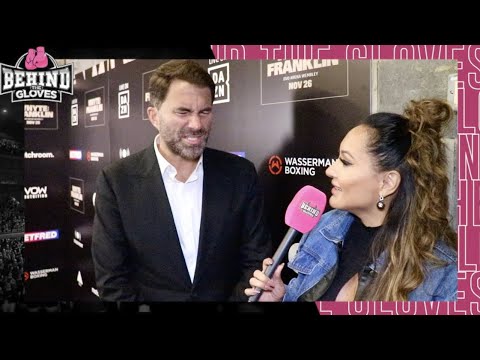 “I think that’s a good fight for him as well. There are lots of options. I think that the first thing is to secure the date and the venue, and obviously, will follow.

“We’ll do our work. It will be a real fight, and we’re looking forward to getting it announced.

“I thought Franklin fought really well tonight, and after five or six rounds, AJ was probably thinking, ‘Maybe I’ll be boxing Franklin next.’ He’s up for any of those guys.

“He starts to approach camp in January now and starts to look at a fight date,” Hearn continued about Joshua.

“AJ wants to try different trainers. He wants to learn. He may not work with one trainer for the rest of his career. I don’t think he wants to make big changes.

“He’s got his style. He’s got to refine it, and he’s got to be confident with it. Whether that’s Roy Jones, I don’t know.


« Eddie Hearn wants to stage Canelo vs. Ryder in stadium in UK

Crawford confirms he’s getting $10M for Avanesyan fight on Dec.10th »