By Allan Fox: Former eight-division world champion Manny Pacquiao says he’s open to the idea of taking on the winner of the Errol Spence Jr vs. Terence Crawford fight. Pacquiao would need to come out of retirement to fight the winner of that clash.

If Pacquiao is serious about wanting to fight the winner, he needs to return to the ring and get a fight under his belt against a top-tier opponent. The boxing public would be more interested in seeing Pacquiao fight the Spence-Crawford winner if he shows that he still possesses his skills by defeating a top 20 contender first.

The 43-year-old Pacquiao (62-8-2, 39 KOs) was asked on Thursday if he’d like to face the still-unsigned Spence-Crawford winner, and he asked in the affirmative.

Despite his advanced age, Pacquiao looked good last year in a losing effort against Yordenis Ugas in August 2021. If Pacquiao hadn’t suffered cramps in his calves from all the running he’d done in training camp, he might have beaten Ugas. The scores were 115-113, 116-112, and 116-112.

“Why not? If that’s possible. We’ll see the result first. I will watch,” said Manny Pacquiao to the media when asked if he’d be interested in fighting the Errol Spence Jr vs. Terence Crawford winner.

At the rate the negotiations are going for Spence-Crawford, Pacquiao might be in his seventies by the time the fight is made. Spence & Crawford might need to move on already because they’ve sacrificed a good portion of 2022 trying to put a fight together, and they have nothing to show for the wasted time.

With the amount of time that Spence and Crawford have put into making their mega-fight, they could have fought twice already this year and made the same amount of money they’d get fighting each other.

Pacquiao has an exhibition match coming up in December against some unknown guy, allowing him to get some of the cobwebs off his game. Pacquiao needs to get back in the ring with a real boxer from the top 20, like Blair Cobbs, Abel Ramos, or a rematch with Yordenis Ugas.

It’s important that Pacquiao fight quality opposition if he’s intent on infighting Spence or Crawford. Those two aren’t going to want to fight Pacquiao if they believe he’s shot. 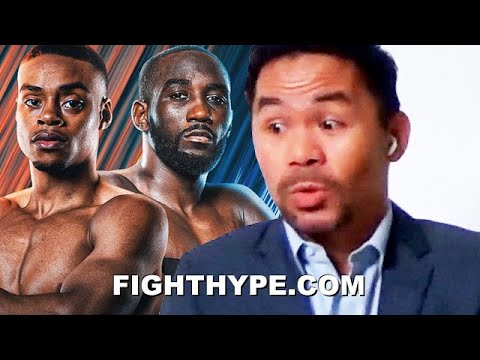 
« Caleb Plant not interested in David Benavidez fight at this time