De La Hoya states that 2023 will be Vergil’s “coming out party” and his big year. The only way that happens is if Spence & Crawford move up to 154 because Vergil won’t beat either of those guys.

Given how Vergil Jr was hurt in his recent fight against Egidijus Kavaliauskas, it would be a cakewalk for the unbeaten Spence (28-0, 22 KOs) to take him out.

With the 35-year-old Crawford fighting only once a year and about to move up to 154, his chances of fighting Vergil Jr are virtually zero. It will not happen unless Ortiz moves up to 154 and becomes popular in a big hurry.

You can argue that Conor Benn is more popular than Vergil Jr, even with his two positive drug tests.

Initially, many boxing fans were excited about Vergil Jr’s future potential. Still, with the glacially slow pace that Golden Boy has been moving up, he’s failed to become a big name in the welterweight division.

People want to see Vergil Jr finally face a live body like Jaron ‘Boots’ Ennis, but that doesn’t seem likely. But at least if Ortiz did take on a fighter like Ennis, fans would get to see whether he’s for real or not.

If Vergil Jr gets machine-gunned down by Ennis with his fast combinations, so be it, but at least he can say he tried.

“Fighters out there, they don’t want to fight Golden Boy fighters,” said Oscar De La Hoya to Fighthype. “So what do we do? We position them to be a #1 contender like Bivol vs. Zurdo. We pushed it; we pushed it, we pushed it, and now it’s happening next week.

“Absolutely, Vergil [Ortiz jr] is in that position. I would love both for Vergil,” said De La Hoya when asked who would be the most likely option for Vergil Ortiz Jr between Errol Spence Jr and Terence Crawford.

“I believe Spence is the easier fight for Vergil. Crawford, I’m telling you, is very crafty, he knows how to move, and he’s slick, but all those fights can be made.

“Quick, in a heartbeat,” said De La Hoya when asked if he’d have made a fight between Vergil Ortiz and Crawford if given the opportunity. “I’m telling you, Vergil is the best 147-pounder out there.

“We’re working on something for Vergil very soon. We’ll have an announcement. We’re excited about that. Next year is going to be a very big year, his coming out party. Nobody will be able to run away from him.

“It’s actually a good fight. It’s going to be a good test,” said De La Hoya about Crawford fighting David Avanesyan on December 10th. “I like the fight, actually, but you run the risk of a head-butt or a cut, broken hand. 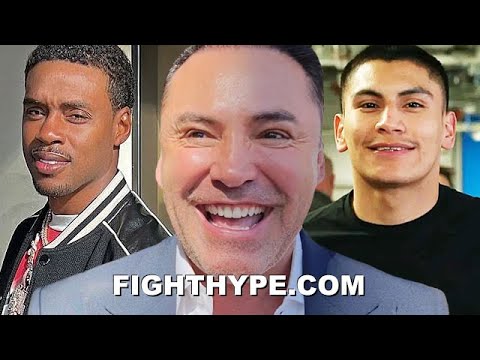 Jaime Munguia vs. Gonzalo Coria on Nov.19th on DAZN in Guadalajara, Mexico »