Lara Knocks Out Sanmartin And Proceeds To Call Out Josh Warrington

By Vince Dwriter: Featherweight contender Mauricio Lara made his return to the squared circle on October 22 as part of the DAZN main event in his hometown of Mexico City, and he looked very impressive as he knocked out Jose Sanmartin (33-6-1, 21 KOs) in the third round.

In his previous bout in March 2022, Lara faced Emilio Sanchez. In the third round, Lara landed a barrage of punches that produced a buzzer-beater-style knockout with only one second left to go in the round. 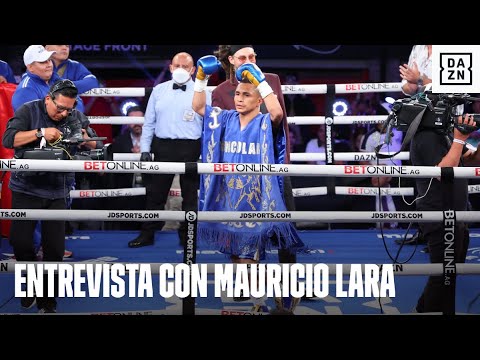 After his thrilling victory, Lara was rewarded with the opportunity to fight for a title against WBA (Regular) featherweight champion Leigh Wood, but unfortunately, the fight was canceled after Wood suffered an injury during training camp.

Instead of fighting for the WBA (Regular) title in September, Lara was rescheduled to fight a month later in a homecoming match versus Jose Sanmartin.

Prior to the bout, Lara predicted the match wouldn’t last more than four rounds. During the first round of the fight, Lara was working off his jab and making early investments to the body of his opponent. Sanmartin was coming forward with the high guard applying pressure, but he didn’t land any significant shots during the course of the opening round.

The second round saw Lara continuing to touch the body, and he was also able to land a few combinations. In the third round, Lara landed a big right hand that knocked Jose Sanmartin down. Sanmartin was able to get up and continue, but seconds later, Lara finished him off with a big left hook to the head.

Mauricio Lara (25-2-1, 18 KOs) took care of business in front of his hometown fans, and now he wants the opportunity to take care of some unfinished business. During his post-fight interview, he named Leigh Wood and Josh Warrington as the two opponents he wants to face inside of the ring.

“I want them both. Warrington has become something very personal, and for Wood, he doesn’t have the right to call himself champion. He said that he was hurt, but I saw him on Instagram, and it looks like it’s not true.”

Lara hasn’t shared the ring with Wood as of yet, but he’s already faced Josh Warrington on two separate occasions. In the first fight, Lara posted a ninth round knockout victory over Warrington, and the second fight ended in a technical draw due to the fact that an unintentional headbutt opened up a massive cut over Lara’s left eye in the third round of the rematch.

Mauricio Lara would like to fight Leigh Wood for the chance to bring a title back home to Mexico City. However, he also wants a third shot at Josh Warrington. If he had to choose one of the two for his next bout, he would rather take care of unfinished business with Warrington.

“I want to face Josh Warrington. It’s become something very personal, and I want to retire him from boxing.”

Steven Nelson: “Spence might move up to duck Crawford and Ennis” »