By Allan Fox: Manny Pacquiao says a rematch with Floyd Mayweather Jr won’t happen because he’s “scared to death” to fight him again.

Pacquiao said yesterday during a press conference for his exhibition match against DK Yoo that Mayweather was “scared” to face him. Despite Mayweather being only two years older than Pacquiao, he hasn’t aged as well as the Filipino star.

Mayweather has lost the hand speed that made him famous and looks glacially slow, and would be vulnerable against Pacquiao. At this point, it wouldn’t be a fair fight because Pacquiao is too fast for Mayweather would likely knock him out, even with large gloves being used.

To be sure, Mayweather has shown zero interest in facing Pacquiao again after beating him by a dull 12-round unanimous decision in ‘The Fight of the Century’ in 2015.

Even though Mayweather could make far more money fighting Pacquiao than in exhibition matches against woefully over-matched YouTubers, he’s not interested.

The 45-year-old Mayweather has been focusing on doing exhibitions exclusively since ending his career with a victory over UFC fighter Conor McGregor in 2018.

Surprisingly, that fight was sanctioned as an officially recognized boxing match by Nevada even though McGregor had never fought before.

“I don’t think that will happen because he’s scared to death to face me in the ring again,” said Pacquiao about Mayweather on Thursday at a press conference for his exhibition match against DK Yoo.

“He’s scared. From the beginning, he’s felt intimidated [by] me and scared to face me.”

Many boxing fans believe Mayweather waited six years for Pacquiao to age enough for him to beat him in 2015. Interestingly, Mayweather didn’t fight Pacquiao until he’d already been beaten by Tim Bradley and Juan Manuel Marquez.

You can argue that if Mayweather had fought Pacquiao during the zenith of his career between 2005 to 2009, he would have lost in the same way Oscar De La Hoya did.

Mayweather has shown no desire to fight Pacquiao and current boxers, preferring to pick up smaller paychecks fighting YouTubers, MMA fighters, and low-level fighters instead.

What’s surprising is that he’s still making good money fighting the exhibition matches. With that said, there appear to be diminishing returns for Mayweather’s exhibition fights because there’s arguably less interest from fans in seeing these non-competition matches.

It’s troubling that Mayweather doesn’t seem to get that the fans are losing interest. 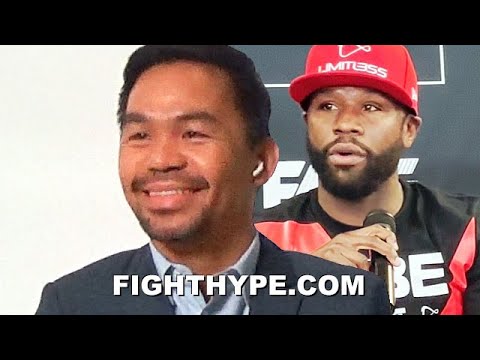