By Chris Williams: Trainer Ismael Salas is high on Terence Crawford, and he believes he will defeat Errol Spence Jr when the two meet for the undisputed 147-lb championship.

Salas’s initial impression of Crawford was made in 2014 when he stopped former two-time featherweight champion Yuriorkis Gamboa by a ninth round knockout in a bout at lightweight.

Although Gamboa was past his prime by that point and fighting two divisions above his best weight, Salas was very pleased with what he saw from Crawford.

Gamboa staggered Crawford at one point and was getting the better of him until the fifth when he slipped on the canvas and was hit while falling by Crawford.

The referee blew the call and gave Crawford credit for a knockdown. From that point on, Gamboa lost his cool and began fighting recklessly, which enabled the counter-punching Crawford to take control of the fight.

“Crawford,” said trainer Ismael Salas to Fighthype when asked who wins the Errol Spence Jr vs. Terence Crawford fight. “He has better tools than Spence. He’s the guy that is very flexible.

“When you find any fighter very flexible in a fight. When I talk about flexible, he can change any situation and make the right adjustment.

“You’re talking about a real-time. When Gamboa was at the orthodox [stance], right-handed, Gamboa kicked his [Crawford] a**. As soon as he saw Gamboa was hitting him, he switched to southpaw, and that was it.

“It was the beginning of the end of Yuriorkis Gamboa,” said Salas.

“I’m going to have to roll with him, but here’s the thing. I’ve had that fight [Spence vs. Crawford] for a long time, and one thing I can say is both of those fighters can do well,” said strength & conditioning coach Larry Wade.

“I’ve had Shawn Porter, and he fought both guys. I saw how he measured up against both guys, and the one thing that I saw that was different was that when it was time for Spence to bite down, he did that. He made it solid.

“But when Crawford bit down, he didn’t just bite down and make adjustments. He got mean, and he brought a certain level of anger with that mean streak.

“That makes a difference in a fight when a guy can bring that mean streak and make a point right here because I need to,” said Wade. 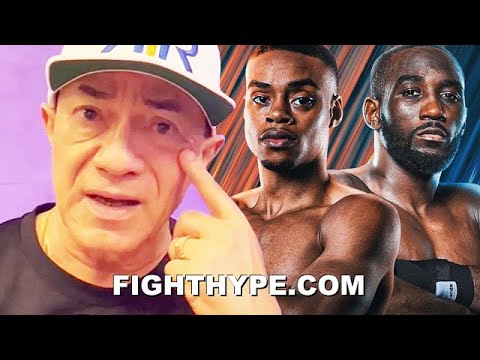