Gilberto Ramirez vowing to get revenge against Bivol for Canelos defeat

By Robert Segal: Gilberto ‘Zurdo’ Ramirez was vowing revenge for Canelo Alvarez and Mexico today in his public workout at the Brickhouse Boxing Club ahead of his fight against WBA light heavyweight champion Dmitry Bivol on November 5th. 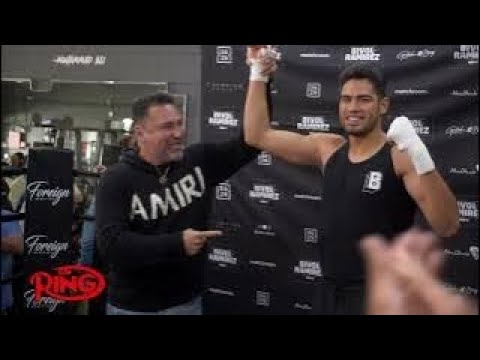 Bivol will defend against Ramirez in the main event on November 5th on DAZN at the Etihad Arena, Abu Dhabi.

Ramirez (44-0, 30 KOs) has taken it upon himself to pay Bivol (20-0, 11 KOs) back for his victory over the superstar Canelo last May. Bivol not only beat Canelo, but he made him look old & rudimentary in terms of boxing skills.

It might be too big of an ask for the 6’3″ Ramirez to be the one to get revenge on Bivol because he’s a little short of the mark when it comes to hand & foot speed.

Also, Ramirez lacks the boxing IQ that Bivol possesses, and he could wind up losing worse than Canelo did. If that happens, Ramirez will have failed at his objective to avenge Canelo’s defeat, and it would be up to another fighter to try and do that if they were so inclined.

It would probably be better for Canelo to be the one to avenge his own losses rather than Ramirez being a proxy for that task. Canelo has already said that he won’t fight Bivol if he loses, and interestingly, he won’t face Ramirez if he wins.

Canelo has made it pretty clear that he will be rooting Ramirez on, likely praying that he defeats Bivol on November 5th so that he’ll be relieved of the burden of having to fight him again.

“I can’t wait to prove to everyone and to myself that I can do this. Bivol is a tough guy,” said Gilberto Ramirez about his fight on November 5th with Dmitry Bivol.

“He’s a really good challenge. But I am going to avenge the Mexican population since he beat Canelo.

“I expect the very best Dmitry Bivol, for this fight. I expect this to be an exciting fight. It will be a war,” said Ramirez.

“This fight was forced on Bivol. Zurdo always wanted to fight for the world title; he wanted to fight the very best. We did our job as a promoter to make this fight happen,” said De La Hoya.

Bivol likely didn’t see any point in giving Ramirez a title because he was focusing on trying to get Artur Beterbiev.


« Has The Gervonta Davis – Ryan Garcia Bout Reached The Point of No Return?