By Charles Brun: Tyson Fury was in the hot seat today, trying to justify his choice of Derek Chisora to the media for the December 3rd title defense of his WBC belt at the Tottenham Hotspur Stadium in London, England.

Fury (32-0-1, 23 KOs) says his fight with Chisora (33-12, 23 KOs) will help the British economy because people will come to London and spend their money in local establishments to help the country.

Also, Fury says he and Chisora will be spending their money in the area. While it sounds nice, it’s enough to sell the mismatch to the British public, who, if they want to watch it, will need to pay to see it on BT Sport Box Office pay-per-view or purchase tickets to see it live at Tottenham Hotspurs Stadium.

Interestingly, Fury claimed that the top heavyweights in the division weren’t interested in fighting him. However, it’s believed that Fury had his sights set on the 38-year-old Chisora after he flubbed up the negotiations with Anthony Joshua.

Chisora was the one Fury wanted from the start, and not surprisingly, the old journeyman quickly signed, not daring to risk losing out on the well-paying fight.

Obviously, when a washed-up journeyman with 12 losses is given an undeserving offer for a title shot by a champion like Fury, of course, they’re going to sign in lightning fashion.

“Me sitting here and trying to sell Derek Chisora to the fans. I don’t have to sell nothing to nobody,” said a defensive-sounding Tyson Fury at today’s kickoff press conference on why he picked the over-the-hill, worn-out journeyman Derek Chisora as his next opponent on December 3rd.

🍸 Derek is like a triple Jack Daniels and Coke! You know what you're going to get War! – @Tyson_Fury

“When you talk about the so-called top guys in the division, we offer them big fights, no smoke. You offer it to Derek Chisora and boom. He’s sitting here opposite of me.

“The man’s got balls, and in this society, in this boxing game, there’s a big lack of balls. You know who you are, these people who don’t want no smoke. With Chisora, he comes and does what he says on the tin. He goes to war.

“Good money, bringing it back to England again for the British economy in our times. People will come here and spend money in London because that helps restaurants, bars, and hotels. Chisora is getting paid, and I’m getting paid.

“What are we going to do? We’re going to spend it in England in the shops, bars, restaurants, pubs, nightclubs, strip clubs, wherever we spend our money, I don’t know. So it’s staying in this country,” said Fury. 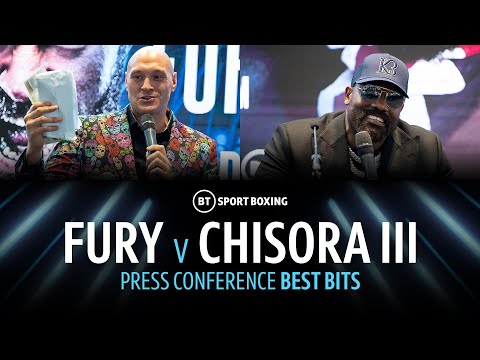 
« OFFICIAL: Fury vs Chisora on Dec. 3. At Tottenham Hotspur Stadium