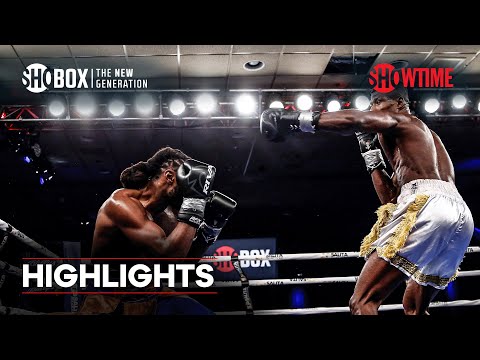 In the co-feature Super Welterweight Marlon “Savage” Harrington lost for the first time by decision to “Marvelous” Marquis Taylor over 8 rounds.

In the first round, Steen showed more movement as the flat-footed Agbeko followed him around the ring for the most part. In the final seconds, Steen took Agbeko down with a tackle.

In between rounds, Agbeko stood without using the stool. Steen took the first two rounds but Agbeko came back in the third and fourth rounds with rights to the body taking both rounds.

In the fifth, through the seventh, the jab of Steen continued to control the power shits of Agbeko, who didn’t land enough of them. In the eighth round, Agbeko seemed to come back well enough, being the aggressor the entire fight to edge out Steen.

In the ninth round, a right from Steen caused a cut on the right eyebrow of Agbeko halfway through the round though Agbeko still did enough to take the round. In the tenth and final round, with a minute remaining, Agbeko landed an overhand right to the chin of Steen.

In the final ten seconds, Agbeko landed a left hook to the side of the head of Steen doing enough to take the final round. The referee was Charles Fitch.

In the first three rounds, Harrington had more power while Taylor, with a bit better reach, used an effective jab. In the fourth through the sixth, Taylor occasionally switching to southpaw out-landed Harrington for the most part.

In the seventh round, Harrington looking behind, is trying for the knockout but Taylor still is the busier of the two. In the eighth and final round, Taylor came right out with a lead right to the midsection of Harrington. Harrington was missing overhand rights and switched to southpaw in the final minute, but it didn’t help him any getting outworked by Taylor, whose jab made a difference.

The referee was Mary Glover, who did well keeping the fighters apart.
Scores were 80-72 and 79-73 twice, as did this writer.

In the first round from the opening bell, both let their hands go until the bell. In the final minute, Johnson had Garcia against the ropes until a pair of Garcia right uppercuts to the chin backed him up. When Garcia came off the ropes, he got hit by an overhand right from Johnson on the chin.

In the second round, it was Johnson who landed a right uppercut drawing blood from the nose of Garcia midway through the round and taking another round. In the third round, it was Garcia backing Johnson to the ropes taking the round though a small cut on the bridge of his nose.

In the fourth round, the action continued, with Garcia landing more through the first half of the round, while in the final minute, Johnson finally went to the body, hurting Garcia with left hooks in a close round. In the fifth and sixth rounds, Garcia’s overhand rights are landing flush, and it was Johnson trying to catch his breath by the end of each rounds.

In the seventh round, Garcia buckled the knees of Johnson with a right uppercut to the chin in the first minute, having him against the ropes. In the final minute, Johnson seemed to catch his second wind outworking Garcia. In the eighth and final round, Referee Ricardo Vera had little involvement, with both willing to slug it out. Johnson may have pulled out the round, possibly evening things up, unless Garcia gets the win landing more punches overall.

In the second round, referee Mary Glover saw enough to call a halt as Navarro overwhelmed Hernandez with a flurry of punches. Navarro is managed by David McWater.