By Charles Brun: Eddie Hearn wants Tyson Fury to take the Joe Joyce fight instead of the Mahmoud Charr match on December 3rd if he’s made up his mind that he doesn’t wish to face Anthony Joshua.

Hearn feels the Joyce (15-0, 14 KOs) fight is the much better one than the unranked Charr, and it’s an easy one to make because Joe is with the same promotional company as Fury.

With that said, Hearn feels that Fury won’t take the fight with Joyce. Instead, he’ll go for the easier contest against Charr, who is ranked #19 with the WBC. In other words, Fury doesn’t want the grueling work involved in fighting Joyce because there’s a good chance he will lose.

Even if Fury were to somehow win, Joyce would knock a few chips off him and leave him a depleted fighter for the rest of his career.

Whatever is left of Fury after a war with Joyce, he’ll be easy pickings for Oleksandr Usyk and Anthony Joshua. Hence, Fury will stay far away from a fight with Joyce because if he takes it, his worst fears will come true.

Joyce is like this era’s version of George Foreman, and Fury is a taller version of Joe Frazier. We all remember what Foreman did to Frazier in their two fights. Fury is made to order for Joe Joyce, and he’d be a flabby punching bag for him.

“I still stand by; he wants to fight Charr. He’s also offered Derek Chisora the fight now,” said Eddie Hearn to Secondsout about Tyson Fury’s plan B options in case the Anthony Joshua fight falls through.

“We don’t know where we stand. We’ll just keep working away with Queensbury. People say, ‘What’s the problem?’ The problem is, it’s a f**** massive fight, and there needs to be a process in place when there’s a revenue split in a fight where everything is in order.

“These contracts go back and forth five or six times before you get it right. I expect Tyson to come out tonight, ‘You dosser. The fights off. Sorry, British public. I couldn’t get the fight because AJ’s a coward, and I’m fighting Charr instead.’ I suggest he fights Joe Joyce if he doesn’t fight Anthony Joshua because that’s a much better fight, but he won’t. He’ll fight Charr just like he fought Tom Schwartz and Sefer Seferi, and Francesco Pianeta.

“If the AJ fight doesn’t happen, Joe Joyce will fight Tyson Fury in December. It’s a tremendous fight. Do you think Tyson Fury will fight Joe Joyce? Don’t be daft. ‘You’ve got to build yourself up.’ He’s #1 in the world, and he’s with the same stable.

“At the moment, he has a great chin, and he can eat shots like Pacman. That won’t last forever, but he’s going to be in entertaining fights. There are great fights out there for Joe Joyce. Dillian Whyte, Daniel Dubois rematch, Tyson Fury, Usyk, AJ

“I can’t knock Tyson Fury. He beat Deontay Wilder, and he beat Wladimir Klitschko. If you start reading the social media comments now, there is sort of a split between, ‘I don’t know what this bloke is going to say or do next. I don’t necessarily believe him too. Yeah, Tyson Fury.’

“You cannot give him a pass to fight Charr. I said originally, I believe he’s going to fight Charr. A week later, they’re going backward and forwards on Instagram. Out of nowhere. Where does he come from? It’s not like he’s even rated.

“They have a conversation, ‘Let’s do the fight.’ I stand by; that’s the fight that Tyson Fury wants to do. If not, why wouldn’t you let your team go through the process to get it done? Queensbury has never said to us, ‘Eddie, you must get this contract done today.

“If they did, we’d tell them the same thing. We’ll crack on and carry on. The fight that we really want [Fury vs. Joshua] might not be done through unrealistic demands.

“We’ve had to accept all their terms with no movement. The split, the rematch clause, the date, which was never ideal to AJ coming off the Usyk fight.

“I said to him, ‘Unless you take this, you’re not going to get the fight.’ So he said,’Okay, I’ll take it.’ He can’t do it anymore.  It’s frustrating sometimes because I read social media where someone just says, ‘Sign the paper. You agreed to the money. What’s the matter with you?’

“There’s no point explaining the complicated nature of these deals, and they’re all unlockable. We can get there on everything. But everyone knows a fight of this magnitude doesn’t necessarily get signed in ten days,” said Hearn. 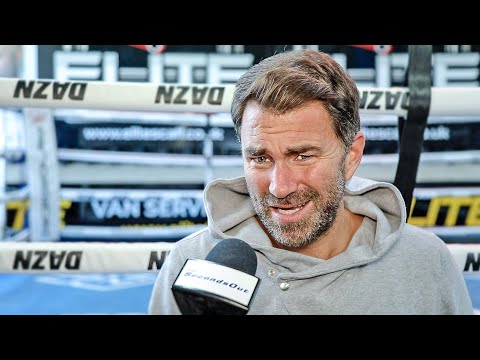