By Barry Holbrook: Eddie Hearn says he doubts Tyson Fury is serious about fighting Anthony Joshua in December. However, Hearn has reportedly spoken to George Warren, the son of promoter Frank Warren, to begin discussions for a Joshua vs. Fury fight in December.

Hearn points out that Fury has been all over the place recently, saying he’s retired, wants $500 million, talking about fighting Derek Chisora, and then suddenly coming out of retirement to throw his hat in the ring for an undisputed fight against Oleksandr Usyk. With the way that

Fury constantly changes his mind, it’s no wonder that Hearn is skeptical about his intentions for a December fight against Joshua. The Gypsy King hasn’t seemed stable since his last fight against Dillian Whyte.

Joshua (24-3, 22 KOs) posted on social media last Monday that he’s “ready” to fight Fury in December if he’s serious. As such, Hearn will put the effort into trying to make the fight, but there’s a lot of doubt about whether it can be made.

“Yeah calm. I don’t do the online discussions just for clout, so if your really about it shout @258mgt. I’ll be ready in December,” said Anthony Joshua on Twitter.

This is easy fight to make normal champion to challenger privileges, & I’m 100% serious 🧐

The comment from Fury about the “normal champion to challenger privileges” is a red flag that he’s going to price himself out for the fight.

It doesn’t matter if Fury holds the WBC title because the casual boxing fans likely are unaware of him holding a title. Unfortunately for Fury, Joshua is the bigger star, which means a lot when it comes to negotiating a fight between them.

“We had plans after the Usyk defeat to come back in December and then go again in March, get active and get the rhythm going again and then try and fight for the world heavyweight title,” said Eddie Hearn to talkSPORT about his previous plans for Anthony Joshua to return to the ring in December after his loss to Oleksandr Usyk last August.

“I know having spoken to AJ, if that fight is there and they’re serious, which I have my doubts about, but for the good of trying to make it happen let’s believe Tyson Fury and I said to George Warren last night, get the details and the offer over to us and I’ll take it to AJ, he’s ready to go.” 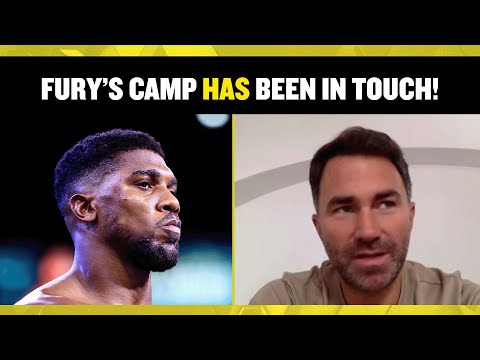