By Barry Holbrook: George Groves feels that the size of Chris Eubank Jr will carry him to victory in his catchweight fight against welterweight Conor Benn on October 8th.

Benn has a catchweight of 157 lbs and a 10-lb rehydration clause to give him an edge, but Groves has doubts whether that’ll be enough for him to defeat Eubank Jr.

Groves says the only shot Benn (21-0, 14 KOs) has of winning is if Eubank Jr is totally weight drained and fails to train hard due to him fighting a welterweight. It remains to be seen if the handicap will help the 25-year-old Benn.

What really hurts Benn in this fight is his lack of experience fighting quality opposition. His promoter has been matching him against horrid foes at 147, as he doesn’t have the benefit of an amateur career.

The money has been so good that Hearn hasn’t been in a rush to begin matching Benn against live opposition, so for that reason, he comes into the Eubank Jr fight ill-prepared to win. The only thing Benn has going is the 157-lb catchweight and rehydration clause.

Benn’s management has set up a two-pronged weight handicap for him to try and make up for his lack of experience and size for the fight against the former IBO 168-lb champion Eubank Jr.

“If Eubank is severely weight drained, tired, and took it easy because he thinks he’s fighting a welterweight or whatever,” said George Groves to iFL TV when asked how Conor Benn can beat Chris Eubank Jr on October 8th.

“If he ain’t quite right. Benn has got to get in there and put him under pressure and make him work, go to the body and look to land a big shot,” Groves continued about what Benn must do to defeat Eubank Jr.

“Eubank does have a good chin, a great engine, good work rate, very strong, decent power, hand speed is okay. He’s made some technical changes since I fought him, now working with [Roy] Jones.

‘We’ll see if they’re beneficial or not. I like Conor. I’ve always been a fan of Conor, and I’ve always appreciated Conor. I got to say it’s an uphill battle for him. I think size wins on the night.

“That means you can still put on another ten pounds between then and fight night by the time you ring walk. You’ve got to be careful what you’re going to play with overnight. It might mean you have a s*** night’s sleep, but maybe not.

“Eubank puts on eleven pounds, has a good night’s sleep, sleeps off two pounds, and a little jog in the morning takes off half a pound, makes the weight, and then hydrates back up.

“I can’t see Conor Benn being able. He’s not cutting ten pounds for the weigh-in when he’s just gone up two weight divisions. Eubank might be 15+ pounds heavier than him on the night, which is a lot,” said Groves. 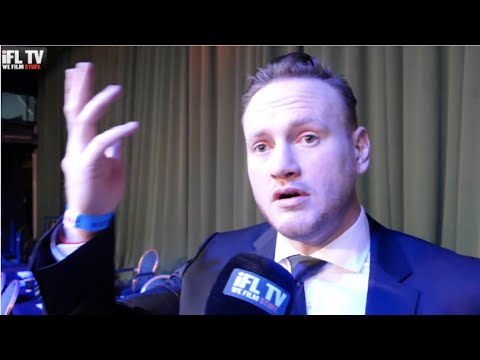 Hearn: “Usyk Won’t Lose A Round To Wilder” »