By Allan Fox: Legendary trainer Freddie Roach is excited about seeing Canelo Alvarez and Gennadiy Golovkin go at it in the main event this Saturday night at the T-Mobile Arena in Las Vegas.

The power of Golovkin is what gives him a decent chance of pulling off the upset against the younger 32-year-old Canelo.

Even with Golovkin getting up there in age, he’s still likely capable of outworking Canelo, which is what his trainer Johnathon Banks wants him to do.

Canelo was outworked by his last opponent Dmitry Bivol and wound up losing a 12 round unanimous decision last May. If Golovkin can duplicate what Bivol did, he can win, as long as he doesn’t get hit a lot like the last time he fought Canelo in 2018.

Roach’s fighter Gabe Rosado will be battling Ali Akhmedov in a 10-round fight on the undercard of Canelo vs. Golovkin III.

“The main event is going to be great. This is their third time together, and the first two were fun to watch,” said Freddie Roach to Fighthype about Saturday’s trilogy between Gennadiy Golovkin and Canelo Alvarez.

“He’s fighting again, GGG. Canelo is a tough guy. He’s got a lot of muscles, new muscles it looks like. I’m not sure where he got those muscles. I might go to that store. Hopefully, it’s all natural. It should be a great fight

“Youth and speed are great, but power is maybe the overwhelming one. Maybe it’s the better thing to have in that. In the first two fights, they fought toe-to-toe. That’s why I’m really excited at being at this fight.

“Somewhat. Big fighters, big names. The crowd is going to be massive. This is what fighting is all about. Not those Cinderella guys fighting each other.

“Two very good fighters. GGG, I’m a very good friend of mine. He came to my gym to meet Manny Pacquiao. Where in the world does a world champion come to a gym to meet another fighter?

“They met and took pictures. It was really, really nice of him to make that move as a world champion coming to see an up-and-coming fighter at that time called Manny Pacquiao. Not everyone knew him at that time. He made him a little more famous,” said Roach. 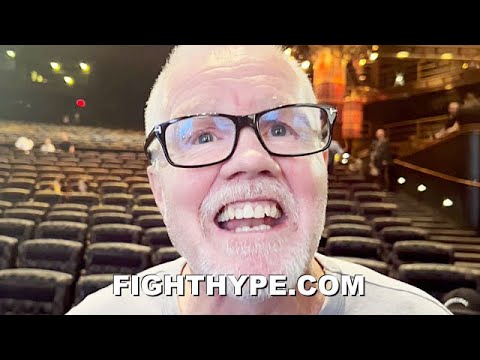