By Charles Brun: Tyson Fury’s co-promoter Frank Warren reports that the contracts for the Anthony Joshua fight are on the way.

Warren, however, says that the Fury vs. Joshua fight isn’t a done deal until the contracts have been signed.

There’s always a chance that when Joshua’s promoter Eddie Hearn looks at the contract, he could find something he’ll take issue with.

As it is, some would argue that Hearn should have negotiated harder to get the December 17th date that Joshua wanted, as well as the 60-40 split for the rematch, if there is one.

If Hearn had chosen to walk away from the negotiations, he likely would have gotten everything he asked for, with the December 17th date and the 60-40 split for the rematch.

Fury was pretty desperate for the fight against Joshua, and he’d have given practically anything to make the fight happen. Look at the reality of the situation.

The only thing Fury had to look forward to if no Joshua fight was the difficult puzzle that IBF/WBA/WBO champion Oleksandr Usyk would present in the first quarter of 2023.

Given how slow and ponderous Fury has become in the last two years, there’s a good chance that Usyk will beat him. Even if he didn’t, what meaningful money fights are out there for Fury?

No one wants to see Deontay Wilder face Fury in a fourth fight, and the one-hit wonder Andy Ruiz Jr. hasn’t redeemed himself after ballooning to 283 lbs and losing his three titles in his rematch with Joshua in 2019.

“The contracts are on their way,” Frank Warren said to talkSPORT about the Tyson Fury vs. Anthony Joshua fight pegged for December 3rd.

“But I’m not going into great detail about this because we saw what happened last time round with people making statements and so forth, and it all fell apart.

“This fight won’t be on until it’s signed, but everybody wants it to happen,” said Warren.

“So hopefully, very quickly, we can get it over the line, but until it’s signed, it’s not on.

“I’m excited about it as a fight because I always felt that Tyson has the beating of AJ, and now we’re going to find out if we get this over the line,” said Warren. 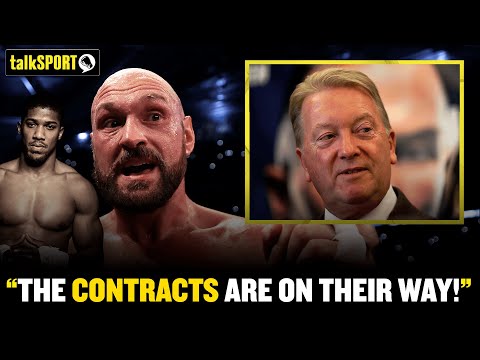