Devin Haney wants Gervonta Davis to face him after Kambosos

By Dan Ambrose: Devin Haney says Gervonta ‘Tank’ Davis can make a fight with him at any time by using his Mickey Mouse belt to become mandatory for his WBA title.

Haney would like to fight Tank next after he takes care of his burden of dealing with George Kambosos Jr for a second time in their rematch on October 16th.

With Gervonta (27-0, 25 KOs), his management at Mayweather Promotions picks out his opponents, and they tend to play it safe with him, arguably feeding him gimmes.

It would be great for Tank’s career if Mayweather Promotions took a chance by matching him with Haney so that he would have a chance to become the undisputed 135-lb champion.

“The fight has built up for years. If he wants the fight, he can have the fight because he’s the WBA fake champion. He has the Mickey Mouse belt,” said Devin Haney to ThaBoxingvoice about Gervonta ‘Tank’ Davis.

If Tank’s management doesn’t make the fight with Haney soon, they may miss their opportunity to capture the four belts before he vacates them and moves up to 140. It could take years before Tank gets another chance to win all four belts at once at lightweight, and he could regret it if he doesn’t face Haney now.

“If he wants to become my mandatory, all he has to do is go to [WBA president] Gilberto [Mendoza]. ‘Hey, we want to make this fight happen.’ and he can become the mandatory whenever he wants,” continued Haney about Tank Davis.

“It all starts with George [Kambosos Jr] and how that plays out. Obviously, if it makes sense, that’s a much bigger fight and the fight that we really focus on.

“Right now, George is the guy, and we can’t look past him. Like I’ve been saying, he says everything but ‘Let’s fight.’ He always seems to say the most outlandish s*** that you could possibly say besides fighting. 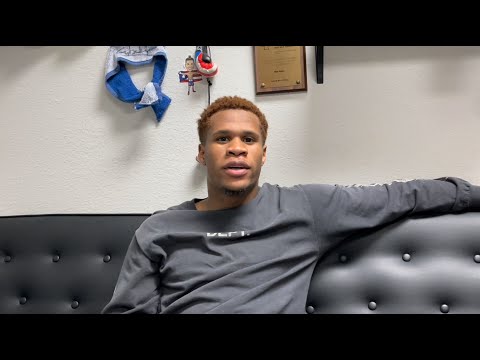