By Sam Volz: Trainer Brian ‘BoMac’ McIntyre insists that Terence ‘Bud’ Crawford will be ready to face Errol Spence Jr on November 19th in their undisputed clash at 147.

The Spence vs. Crawford fight still hasn’t been signed, but negotiations are reportedly looking good for the two welterweight champions to meet up less than two months from now in Las Vegas.

WBO champion Crawford (38-0, 29 KOs) will be taking a huge step up in class from the opposition that he’s been facing at welterweight. He hasn’t fought anyone near the level of Spence since moving up in 2018, so it’s hard to know how he’ll react.

BoMac doesn’t like people saying that Crawford hasn’t fought anyone, but that’s the reality of the situation. He hasn’t fought dangerous welterweights like Jaron ‘Boots’ Ennis, Vergil Ortiz Jr, or Yordenis Ugas.

“I think Spence is something special because of where he’s at in this game. But I know Bud and how much he wants to fight Spence,” said trainer Brian ‘BoMac’ McIntyre to Fighthype.

“He wants to conquer the 147-lb division; he wants to be undisputed king. It is a tough task for a fighter that wants to do that against a fighter like Spence, but you better believe me, Bud is ready.

“I’m tired of people saying Bud hasn’t fought nobody. Once he conquerors and becomes the undisputed champion, all that s*** is dead.

“Boots is phenomenal, a great fighter, a good kid. I’m sure that fight comes across the board, and everything matches up right; that’ll be something we’ll look at,” said BoMac about a fight against Jaron ‘Boots’ Ennis.

“They fight the same,” said BoMac when asked who is the tougher opponent for Crawford between Spence & undisputed junior middleweight champion Jermell Charlo. “I would give it to Spence because of what he’s accomplished in the sport of boxing.

“He’s [Jermell] been beaten before. Spence hasn’t been beat. First of all, we want the win. We’re going to go in and get the win. For the fashion that it comes, we’re going to be ready to go 12 rounds. If the knockout is there, we might as well take it. 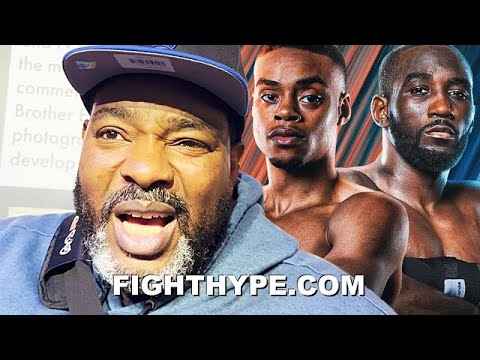