By Geoffrey Ciani: Coming up on September 17th at the T-Mobile Arena in Las Vegas, Nevada, in a championship bout that will be broadcast on the relatively new DAZN PPV, Canelo Alvarez and Gennady Golovkin will meet for the third time.

That first fight between Canelo and Golovkin happened back on September 16th, 2017. Going into that one, Gennady was the undefeated unified IBF/WBC/WBA middleweight champion, and Canelo had a rightful claim as the lineal middleweight world champion. The fight ended in a controversial draw where most observers believed Golovkin deserved to win. 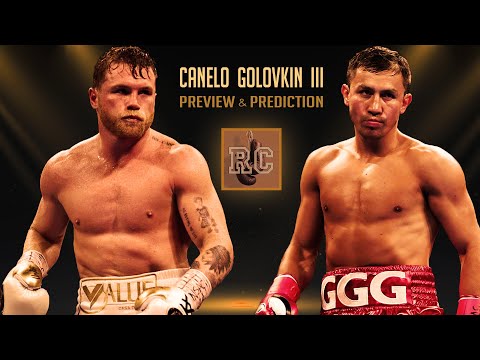 The rematch happened almost exactly a year to the day later, on September 15th, 2018. Golovkin had been stripped by the IBF, so it was his unified WBC/WBA, against Canelo’s valid lineal claim. This time Canelo was awarded a 12 round majority decision, in a very close and competitive contest, where again, there were many observers who believed Golovkin deserved to win, but this decision was far less controversial.

Since they last met 4 long years ago, the two boxers appeared to be on diverging paths. Golovkin has gone 4-0 since the rematch, including a victory over Sergiy Derevyanchenko to win the vacant IBF strap, and most recently he beat Ryoto Murata in a unification bout to also earn the WBA belt. Canelo has gone 7-1, where he won a middleweight unification bout against Daniel Jacobs, he won the WBO light heavyweight belt against Sergey Kovalev, and he beat Callum Smith, Billy Joe Saunders, and Caleb Plant – three undefeated titlists at super middleweight, which made Canelo the first undisputed world champion in the history of the 168 pound weight class. In his most recent bout, Canelo lost by unanimous decision when he challenged Dmitry Bivol for the 175 pound WBA belt.

Gennady Golovkin is 40 years old. Gennady is no spring chicken, and his skills have eroded at least a little bit since they last met 4 years ago. Gennady is also a career middleweight, so this will be his first bout at 168. On the other hand, Canelo is coming off his first loss in a very long time, and that in itself makes this trilogy fight inherently more intriguing.

So who will win the upcoming September 17th battle for undisputed super middleweight supremacy between Canelo Alvarez and Gennady Golovkin?

This edition of Rummy’s Corner will attempt to answer that question while providing a quick preview for the upcoming super middleweight showdown between Canelo Alvarez and Gennady Golovkin. Please watch and enjoy the video for one man’s opinion. This is Rummy’s Corner (produced and narrated by Geoffrey Ciani).