By Jim Calfa: Vasily Lomachenko arrived in Los Angeles today to begin his training for his tune-up fight in October.

The talented former three-division world champion Lomachenko (16-2 11 KOs) has been out of the ring since December due to him defending Ukraine as part of the Belgorod-Dnestrovsky Territorial Defense Battalion.

Lomachenko, 34, will be getting ready for a quick warm-up fight in October against an opponent still to be named before taking on undisputed lightweight champion Devin Haney for his four belts.

Haney has been vocal about not wanting to wait around for Lomachenko while he takes a tune-up fight, as he feels he shouldn’t need a warm-up match before fighting.

It’s unclear whether Lomachenko has lost weight while defending his country in the war. If he lost muscle mass, as unified heavyweight champion Oleksandr Usyk did while serving his country, it would make sense for Lomachenko to take a tune-up fight first.

“I pray every day for Ukraine, for the people…. and stop the war,” said Lomachenko. “When I came back to Ukraine, I believe it was the second day of the war. Your mind changes because you see a different life. It’s a different life. Nobody knows what happened on this day.

“It’s very bad. It’s very bad for the world,” Lomachenko continued. “I’ve prepared for this moment, and I need this chance. I need this fight [for the] undisputed. Undisputed world champion.”

That was a fight that Loma could have ended early if he’d wanted, as he had Commey hurt, but he chose not to put his foot on the gas to get him out of there.

If Lomachenko can defeat Haney in either December or early 2023, he’d be the new undisputed champion at lightweight and would be in the enviable position of defending the belts against the top guys like Gervonta Davis.

It’s too bad Ryan Garcia, and Teofimo Lopez have both moved up to 140, as those two would be excellent opponents for Lomachenko to fight next year. 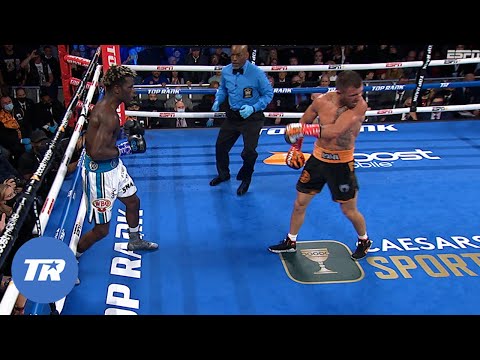 Saul ‘Canelo’ Alvarez vs Gennadiy ‘GGG’ Golovkin III: How To Order The PPV »