By Craig Page: Michael Conlan believes Leigh Wood has made a drastic mistake by choosing to defend his WBA ‘regular’ featherweight title against the big puncher Mauricio Lara next on September 24th.

Conlan (17-1, 8 KOs) says it’s a “silly fight” on Wood’s part to take on a dangerous foe like Lara in a “pointless” match-up when he could make twice the amount of money in a rematch against him. Wood stopped Conlan in the 12th round in a come-from-behind victory last March.

A rematch between Wood and Conlan would have created a huge amount of interest in the boxing world, and surprisingly, Leigh has chosen not to go in that direction.

Conlan recently bounced back from his loss to Wood, defeating veteran Miguel Marriaga by a 10 round unanimous decision earlier this month on August 6th.

Wood is facing Lara on DAZN on September 24th at the Motorpoint Arena, Nottingham, England.

“What’s the point of fighting Lara? What does he get for beating Lara? Does he beat Lara? In my opinion, no. I think he gets flattened.

“In the words of Leigh Wood, I’m feather-fisted, and if there were 20 more seconds in that round, it would have been all over,” Conlan continued, talking about him having dropped Wood in the first round in their recent fight in March. “He was flattened.

“So if a feather-fisted fighter is flattening you, a heavy puncher like Lara is going to put you to sleep. Yeah, I think it’s a silly fight, a fight where I think, I don’t know why, but I think his coach made him take it because they probably don’t want to have a rematch.

“It’s a tough fight, but I think he’s a bit slow. I don’t think he’s clued in business-wise and not making smart business moves. He’s on about setting his family up and doing this here in the sport and having big meaningful fights.

“I think the [Conlan] rematch is more meaningful and bigger than the Lara fight. I think if you want to earn money and set your family up for life, the rematch I the better fight to take. It’s more money; it’s an awful lot more money. So, he’s probably done himself a few million there really.

“I don’t understand it, but credit to him for fighting Lara, but I don’t think it’s solely his choice. It’s more so his coach’s ego in the way. I know I was told that his coach doesn’t want to give me the rematch because they disrespected me and my brother in the last build-up because he got disrespected.

“His coach’s ego has gotten in the way of him earning a few million. It’s silly. If not, he wants to fight someone like Lara to prove something for nothing. Fair play to him.

“No,” said Conlan when asked if he was ever in discussions for a rematch with Wood. “I know that Top Rank has reached out to Matchroom about doing it in the winter. For some reason, it hasn’t happened.

“I wasn’t brought up. It was probably canceled out right away when they were talking about potential opponents. They probably didn’t [want it]. His coach or him maybe didn’t want to have that fight and the rematch just after having such a hard fight against me.

“They say they want bigger and better fights instead of looking back. I think the rematch is a bigger & better fight than anything out there for them. I think the majority of people will think that as well.

“Top Rank would have been happy to fight on DAZN on their broadcast. There was no problem. Fair play to them. Maybe they’re doing their own thing.

“I don’t care,” said Conlan when asked if he’s bothered that he wasn’t offered the fight by Wood. “My career isn’t about Leigh Wood. It doesn’t bother me not having the fight. I just think it’s a silly mistake on their behalf. If Leigh Wood loses if he thinks I’m a fallback, which is not going to happen.

“What’s the point? If the money isn’t right the way it would be, I wouldn’t be doing it. I don’t think Lara vs. him or even the undercard would have done half in the City Ground. To be honest, I don’t think it fills the Motor Point. It could do if they stack the card completely and sell tickets.

“That fight itself won’t sell the Motor Point because non-boxing fans don’t have a clue who Mauricio Lara is. It’s a weight situation for him and for them.

“I hope he wins, but I think Lara flattens him. He’ll probably go back to the small paydays and being silly again. I don’t know,” Conlan said when asked where Wood goes if he loses to Lara.

“It’s exactly what he should have done,” said Conlan about Wood rematching him. “He could have earned a lot more money than fighting someone like Lara, earning half the money at the start for that fight compared to the rematch fight. 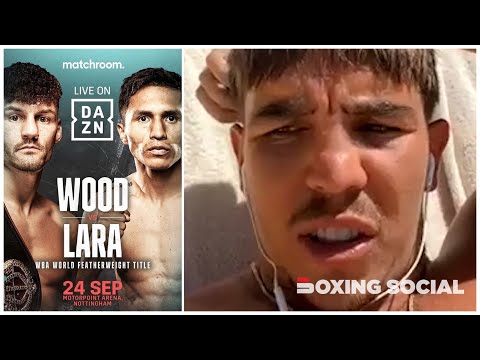 Chris Eubank Jr says his dad will be in his corner for Conor Benn fight on Oct.8th »