By Adam Baskin: Trainer Robert Garcia has no doubts in his mind that Anthony Joshua can knock out IBF/WBA/WBO heavyweight champion Oleksandr Usyk in their rematch on Saturday night at the Jeddah Superdome in Saudi Arabia.

From what Garcia has seen of Joshua (24-2, 22 KOs) in training camp and from watching his previous fight against Usyk last September, he believes he’s made enough improvements in his game in the last eleven months to stop the champion.

Joshua, 32, will need to go out and prove Robert’s prediction, and it’s going to be hard to do because Usyk has made improvements in his own game, and he’s not going to lay down on the night.

“100%. We’ve been watching some of those punches he connected in the first fight, and I wasn’t there. I didn’t know Anthony Joshua then,” said trainer Robert Garcia to iFL TV when asked if Joshua could knock out Usyk.

“But when I came to camp, not one, not two, but everybody in camp, including Anthony, told me that was the worst camp he ever had. It was just a camp he wasn’t there.

“So if he had such a bad training camp, the sparring was horrible, they tell me. The sparring partners that we have are some that were the same guys. They’re telling me the same thing.

“The first fight, ‘He [Joshua] wasn’t training. It was easy work for us. Now it’s a lot harder. He’s punching hard, and he’s aggressive.’

“Just by that itself, he still managed to win four or five rounds. Some of the judges gave him. One judge gave him five rounds. He won a few rounds and landed some good punches where he stunned Usyk a few times with a straight right hook.

“So, if he was able to do that on one of his worst days and maybe Usyk’s best performance, well, what makes me think he can’t do it now with a great performance, a great training camp, and a different mentality, different team behind him. 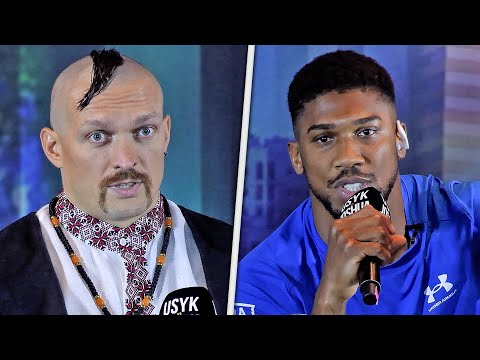