Joe Cordina defends against Shavkat Rakhimov on Nov.5th on DAZN in Abu Dhabi

By Barry Holbrook: IBF super featherweight champion Joe Cordina will be defending against his unbeaten mandatory Shavkatdzhon Rakhimov on the undercard of Dmitry Bivol vs. Gilberto ‘Zurdo’ Ramirez on November 5th at the Etihad Arena in Abu Dhabi, UAE. The fight card will be shown on DAZN.

Cordina will be essentially facing a smaller version of Dmitry Bivol, as Rakhimov fights with the same style and throws sustained combinations just like the unbeaten WBA 175-lb champion.

The only blemish on Rakhimov’s resume is a 12 round draw against Joseph ‘Jojo’ Diaz. That was a fight Rakhimov was winning in the first half of the contest, but ‘Jojo’ Diaz was able to will himself to rally in the second half to salvage a draw.

Rakhimov has excellent hand speed, good power, and a strong chin. Cordina may find it difficult trying to knock this guy out, as he did his last opponent Kenichi Ogawa.

If Cordina can’t score a knockout of Rakhimov, he’ll be in for a long night because this guy is going to put hands on him.

Out of all the contenders in the 130-lb division, Rakhimov is arguably the toughest for a fighter like Cordina, who loads up on virtually everything he throws and doesn’t throw combinations.

Cordina’s goal is to become the undisputed champion at super featherweight, but the only way that happens is if Shakur Stevenson and Oscar Valdez move up to lightweight because he’s unlikely to beat either of those fighters.

“The Welsh Wizard [Joe Cordina] landed the IBF Super-Featherweight World Title with an epic one-punch knockout win in his home city earlier this year, but that’s just the start of the journey for Welsh boxing’s latest star,” said Eddie Hearn.

“Joe has ambitions of becoming undisputed at 130lbs, but first he needs to get past an incredibly tough first defense in the shape of IBF number one Rakhimov, who has already challenged for the IBF crown.”

It would be better for Cordina to just focus on his fight with Rakhimov and not get carried away with his dreams of being the undisputed champion. 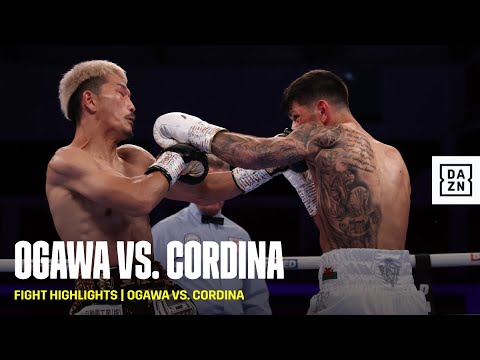