Lipinets, who took the fight on five-days-notice, floored Figueroa (28-3-1, 19 KOs) with a short, compact counter right hand with a minute left in the second round. Figueroa rose on shaky legs and Lipinets (17-2-1, 13 KOs) moved in and inflicted more punishment, round after round until the bout was stopped. Lipinets was initially penciled in to perform on the non-televised portion of the undercard but was shifted to the main event when former four-time champion Adrien Broner withdrew from the matchup with Figueroa, citing mental health issues. 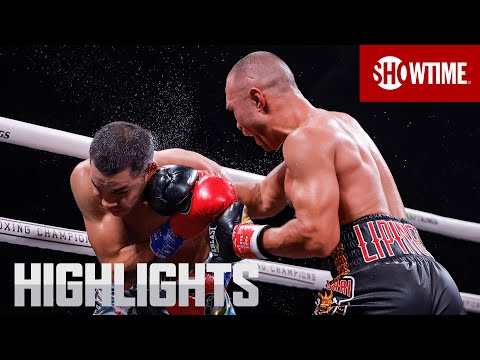 “I had a good fighter in front of me,” Lipinets said in the ring afterward. “My hat’s off to Omar for being a warrior. The punch that rocked Omar is the punch that my trainer and I have been working on for a long time. He came at me, and it was the perfect time to use it. I was too focused on protecting myself. I was concerned about him answering my punches, but it was not my job to stop the fight. 140 is my weight. I came back. I’m back.”

Lipinets held Figueroa to just 44 landed punches over eight rounds while landing 172 shots and 46.7% of his power punches on his way to the 8th round TKO.

Once an aggressive, punishing fighter who overwhelmed his opponents with pressure, Figueroa suffered his third straight loss after dropping a decision to Yordenis Ugas in 2019 and suffering a KO loss to Abel Ramos in May 2021. Figueroa fought valiantly, even stunning Lipinets with a right hand midway through the sixth, but it was otherwise a resounding performance from Lipinets, who stamped his name as a player in the suddenly crowded super lightweight division. Lipinets hadn’t fought in 16 months since a sixth-round knockout loss to uber-talented welterweight Jaron Ennis, but the change in weight and opponent served him well.

“I’m very disappointed about the outcome,” Figueroa said. “My team and I worked so hard during this training camp. My body has reached its limit. I’ve been doing this for 27 years and my body has finally said enough. I’m just sorry I’ve disappointed the fans. The change of opponents didn’t affect me. I think I’ve reached the end of the line here in boxing. It occupied my life for 27 years. My body just gave up. It didn’t respond.”

In the run-up to Saturday’s fight, Figueroa emerged as an eloquent spokesperson for people struggling with mental health issues after he was diagnosed with his own set of mental health concerns. In the ring afterward, Figueroa reflected on his career, on the limitations of his athletic abilities and on the birth of his daughter earlier in the day in announcing his retirement.

“I’m happy that I got to enjoy this last camp. I had a great time,” he said. “For everyone out there going through a tough time or in a dark place, I want to say, ‘don’t you ever give up. Keep up the fight.’”

In an all-action affair, Alberto Puello and Batyr Akhmedov produced one of the better and compelling fights of 2022, but it was Puello who made history for his country, becoming the first Dominican fighter to ever win a title at 140 pounds by claiming the vacant WBA Super Lightweight World Championship in the co-main event by split decision. The judges Benoit Roussel and Mark Streisand both scored the bout 117-111 for Puello, while Lisa Giampa awarded Akhmedov’s aggression with a scorecard of 115-113.

Puello (21-0, 10 KOs) was able to handle the constant pressure of Akhmedov, who came up short for the second title fight of his career after he lost a decision to Mario Barrios in 2019. Puello was able to fight well off the ropes and answer the advances of Akhmedov (9-2, 8 KOs) with stinging combinations. Puello joined his countrymen Hector Garcia, who dethroned Roger Gutierrez for a 130-pound championship earlier in the evening, to produce arguably the greatest day in the history of Dominican boxing with two title winners. The two are good friends, both sharing the hometown of San Juan de la Maguana in the Dominican Republic.

“This was the hardest fight of my life, but the one I prepared the most for,” Puello said in the ring. “I do feel a lot of emotions, and two Dominicans were crowned champions on the same night. This win means a lot to me. This is a big thing for us Dominicans because my friend Hector Garcia and I are bringing two titles back home. My hometown, San Juan de la Maguana has already started the party and they are waiting for Garcia and I to come back and join them.”

With the word “shark” stitched onto his shorts, Akhmedov marched forward round after round, attacking Puello’s body and raining down punches. Puello, for his part, was content to counter with uppercuts and winging shots as the two fell into a frenetic rhythm for 12 punishing rounds. Akhmedov had Puello retreating in the sixth as he dug body shots, but Puello landed perhaps his signature punch of the night, a bruising uppercut in the eighth that snapped Akhmedov’s head back as Puello seemed to sit down more on his punches in the second half of the fight. Fittingly, the bout ended with both fighters standing toe-to-toe, exchanging violent combinations as the bell ended the entertaining slugfest.

“I mixed it up, sometimes counterpunching and some other times coming forward,” Puello said. “What I studied from the gym and from the videos, I knew he would apply pressure. But I was actually surprised with the amount of pressure he started with and in the end I was able to figure him out. I knew it was a close fight, and I just kept the distance and kept the pressure on the jab tonight and that helped me get the victory.”

Earlier in the evening, Hector Garcia proved that his dominant win against Chris Colbert in February wasn’t a fluke.

Garcia, a former Olympian from the Dominican Republic, dictated the action and survived a late rally to wrest the WBA Super Featherweight World Championship from Roger Gutierrez via a unanimous decision by scores of 117-111, 117-111 and 118-110 from Alexander Levin, Michael Ross and Fred Fluty to remain undefeated at 16-0 with 10 KOs.

“It means a lot to me to win this title,” Garcia said. “I dedicate it to my people, the entire Dominican Republic and my town, San Juan de la Maguana. In the pros, nobody knew me. But in the amateurs, people knew my name. I went to the Olympics – it was my dream. I had a good run. [Gutierrez] was looking for the right punch to take me down, but I was able to dominate, dictate the pace of the fight and get the win.”

After beating the previously undefeated Colbert as a late replacement on two-weeks-notice on February 26 when Gutierrez withdrew because of COVID, a focused and strategic Garcia kept Gutierrez on his back foot for most of the fight as he fed the titleholder a steady diet of up-jabs and hard lefts to rack up the first nine rounds on all three scorecards.

But Gutierrez, his hair tinted green and his left ear cut and bloody, stormed back in the later rounds, winning the final three frames on two of the judges’ scorecards as the southpaw Garcia appeared to tire and was squaring himself up. Gutierrez (26-4-1, 20 KOs) pushed Garcia back with right hands, his energy and punch-output surging. He appeared to hurt Garcia in the 11th round with a right as Garcia sagged against the ropes, but Garcia answered with lefts and rights of his own to blunt the rally.

Garcia out-landed Gutierrez 156-116 in total punches and landed 35% of his power punches.

“I never felt like I was hurt badly during the fight, but it was a fair decision,” Gutierrez said. “I started too late in the fight. In the middle of the eighth round, I started to connect on my punches. He moved around my left hand. He’s not an easy fighter, for sure. It’s a bad moment for me right now, but it’s just one loss. I’m still young, only 26 years old. I’ll wait a little bit to know what I’ll do next, but I’ll rise again. For now, I want to rest and be with my family.”

In the telecast opener, the knockout artist Brandun Lee dealt with serious adversity for the first time in his career when he was dropped hard by a right hand in the third round. After rising and clearing the cobwebs, Lee relied on his boxing skills and savvy to capture his second straight 10-round decision against the tougher than expected Will Madera at a super lightweight bout waged at 143 pounds.

Despite the knockdown, Lee was otherwise dominant, winning by scores of 98-91 from the trio of judges Daniel Fitzgerald, Lisa Giampa and Mark Streisand to improve to 26-0 with 22 knockouts. Lee blamed overconfidence on getting caught in the third.

“I think I went in there a little too careless,” Lee said. “I told myself this guy has nothing to give me, but boy was I wrong. I lost focus and overlooked him for that split second. I was cautious in the first couple rounds, the first three until I got hit. I need to keep my left hand up and remain on my toes at all times. I’m not fighting tomato cans anymore, the dude was like No. 17 in the U.S. and has some experience. You can’t knock everyone out. I had to change the game plan. I went from moving forward to boxing. I got hit with a clean shot but I kept on going. I recovered. Like I said before, death before dishonor.”

After bloodying Madera’s eye in the second round with a dagger of a right hand and left uppercut, the first time that Madera (17-2-3, 10 KOs) had ever been cut, Lee was caught by a picture-perfect counter overhand right that landed squarely on Lee’s chin, dropping the 23-year-old hard with around 20 seconds remaining in the third round, the first time in Lee’s career he touched the canvas.

The sequence resulted from Lee throwing out a lazy jab and Madera countering over the top. Lee thudded hard to the canvas on his side, his equilibrium clearly off and he was on shaky legs as he rose and survived the remainder of the frame. Lee of La Quinta, Calif. out-landed Madera 168-127 in total punches and threw 431 jabs to survive the scare and move on in his promising career.

Afterward, Lee expressed a desire to face the winner of a match reportedly ordered for the interim super lightweight IBF title between Subriel Matias-Jeremias Ponce.

Undefeated middleweight Fiodor Czerkaszyn (20-0, 13 KOs) recorded a fourth-round stoppage of Gilbert Venegas Jr. (11-2, 7 KOs) when Venegas’ corner threw in the towel at 2:19 of the round in a scheduled eight-round duel. Additionally, Atif Oberlton won a six-round decision by scores of 60-54, 60-54 and 59-55 over Robert Burwell to improve to 6-0 with 5 knockouts, while Burwell dropped to 9-7, prior to the start of the televised quadrupleheader.

Anthony Joshua must back Oleksandr Usyk up to win »