By Brian Webber: Ryan Garcia already has big plans for after his next fight against Javier Fortuna on July 16th against either Devin Haney or Vasyl Lomachenko.

Ryan (22-0, 18 KOs) says he’s too big for the lightweight division and a “cheat code.” For that reason, he wants to fight WBA ‘regular’ 135-lb champion Gervonta ‘Tank’ Davis in November or December and then challenge undisputed champion Haney, for his four belts.

If Haney’s not available, Ryan wants to take on former three-division world champion Lomachenko if he’s back from the war in his homeland.

Many boxing fans don’t believe Ryan deserves a fight against Tank Davis because he’s not fought anyone good during his career. Still, the same can be said about Rolando ‘Rolly’ Romero.

Before the 23-year-old Ryan gets to those exciting fights, he must defeat 33-year-old Fortuna (37-3-1, 26 KOs) on July 16th in their main event match on DAZN at the Crypto Arena in Los Angeles.

Fortuna is coming off an impressive first-round knockout win over journeyman Rafael Hernandez (32-16-3, 25 KOs) in a bounceback fight last February.

In his previous bout, the former WBA super featherweight champion Fortuna lost to Joseph ‘Jojo’ Diaz by a 12-round unanimous decision on July 9th in Los Angeles.

Diaz came in as a late replacement opponent for Fortuna after Ryan pulled out of the fight due to anxiety issues.

“Depending on if this Gervonta fight goes down, we’ll see what we do after that,” said Ryan Garcia during a virtual roundtable this week when asked if he could move up to 140 or 147 after he faces Javier Fortuna on July 16th.

“Whether it be at 140 or 135 to fight Devin Haney or Loma, we’ll see because those are the opportunities I hope to have in front of me after Gervonta Davis. It would be either Loma or Devin.

“I look too strong for 135. I look like a cheat code for 135,” continued Ryan Garcia. “I’m too damn big. I feel like I’m growing into, I would say, the difference between a young man and a man.

“I think I transitioned into. I believe that my strength has been building. You could see the difference and feel the difference. Everything is looking sharp.

“My timing, my speed, my accuracy, my understanding of defense, and just understanding where I’m at in the ring at all times. I never feel confused when I’m in there.

“I’m in a really good place, and the only thing left to show is to show it in the ring. I’m so excited because I want to do it already, but it’s just time. Two weeks.

“I think because I’m from Southern California, I think it’s important for me to have a great event and just bring everybody I know out, especially at that arena, the Staples Center.

“I expect something magical to happen that night. That’s where legends were made. Everybody that was a legend came through there. It’s my time to shine, and I hope to do something amazing,” said Ryan Garcia. 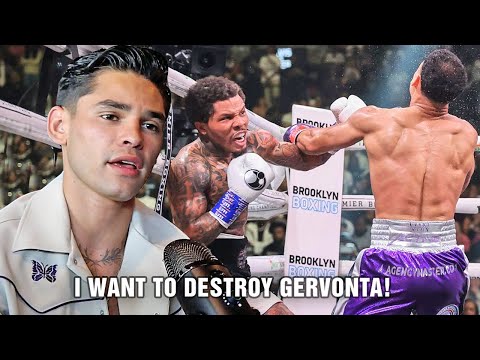