“Lightweight Frank Martin may be ready for the big time,” says expert trainer

By Reggie Luna: Saturday, July 9, from the Alamodome in San Antonio, Texas, Showtime Sports and PBC will present an intriguing triple-header featuring “Mark Magsayo vs. Rey Vargas” for the WBC Featherweight Championship in the highly anticipated main event.

Although all three featured bouts garner great interest from every avid observer, the opening bout of the broadcast is currently generating a lot of buzz from boxing writers and die-hard fans alike.

While Marinez is a very skilled and experienced fighter, most critics and handicappers believe the talented southpaw from Indianapolis will prove to be too much for his gallant opponent this weekend.

In a recent interview with five-decade fight trainer James Gogue, the knowledgeable coach offered his personal scouting report on the gifted 27-year-old contender.

“Out of all the PBC 135 pounders, this guy is the most troublesome for all potential opponents,” Coach Gogue recently stated to “Young Billionaire Boxing” on YouTube.

“He’s a highly intelligent southpaw who moves extremely well. He’s also a razor-sharp counter puncher who works behind an intelligent jab. He’s a stylistic nightmare for everyone at Lightweight.”

Even though Martin has only been an active professional for less than five years, the veteran fight trainer already favors Martin over most combatants within the Lightweight division.

“With only 15 professional bouts, I’d favor him right now over most active contenders in the packed 135-pound division. His movement, his angles, his defensive skills, his counter punching ability…he’s shown me that he can handle himself proficiently in the pocket when he has to, and he doesn’t get hit a lot.”

“Martin is fast and explosive at times, combining speed with power. Honestly, he’s a real problem for all of those Lightweight fighters at PBC…Romero, Cruz, Valenzuela, and even Tank. I see Frank Martin frustrating all of them because it’s very hard to get a clean shot on him.”

“You’re going to have to be well prepared with a solid game plan when you fight a special talent like Martin.”

The Detroit, Michigan, native initially caught Coach Gogue’s trained eye in May of 2016, while competing in the finals of the Golden Gloves Tournament of Champions against current Welterweight contender Vergil Ortiz, whom he defeated by a 3-2 margin.

“I remember seeing him win the Golden Gloves in 2016 at 141 pounds in Utah. He beat up and actually floored Vergil Ortiz, making it look easy. Martin really caught my eye back then, and I knew he had the ability to be something special. High-level skills, reflexes, athleticism, natural talent…I said to myself, this kid seemingly has it all.”

In spite of the fact that Frank Martin’s future indeed looks bright, the experienced coach points out a potential obstacle during his ascension to the Lightweight world championship.

“It’s important that PBC keeps this kid active and cultivates him into a big-ticket seller or headlining attraction. Because unless there’s big money attached, everyone at 135 pounds will try to avoid Frank like the Coronavirus. His style is that problematic. They won’t want to fight him unless they absolutely have to.”

“And I’m referring to everyone at 135 pounds…Ryan Garcia, Devin Haney, Rolly Romero, Isaac Cruz, George Kambosos, and even Tank Davis. Can you see Floyd or Oscar sticking their big attractions in against Frank Martin unless they absolutely have to?”

“He’ll be viewed by everyone as too high of a risk, just like how Jaron ‘Boots’ Ennis is currently perceived by everyone at 147. They’ll go out of their way to avoid this kid. So it’s important that PBC and Showtime keep Martin active and within the focus of interest.”

Is Martin the “real deal” at 135 pounds, and is the talented southpaw ready for the Lightweight elite?

Fans can decide for themselves as to how high Frank Martin’s professional ceiling truly is by tuning in to Showtime Championship Boxing this Saturday night, July 9, at 9 PM ET/6 PM PT, as he competes against Jackson Marinez in the scheduled ten-round opening contest. 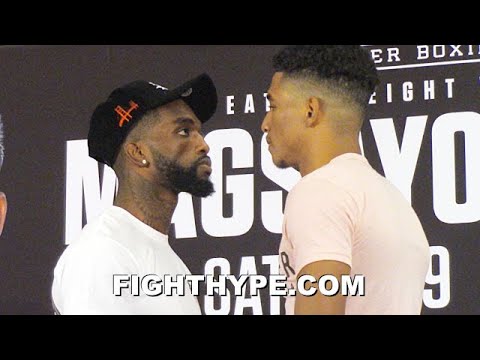