By Mark Eisner: Ryan Garcia (23-0, 19 KOs) made easy work of former WBA super featherweight champion Javier Fortuna (37-4-1, 26 KOs) in stopping him in the sixth round on Saturday night at the Crypto Arena in Los Angeles, California.

Ryan dropped the 33-year-old Fortuna with a left hook to the head in the sixth. Fortuna then spit out his mouthpiece while on one knee, letting the referee know that he was done. 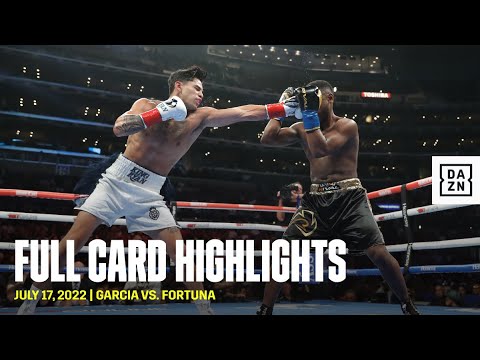 Fortuna was dropped in the fifth from a similar left hook to the head, and he was also down from a hard body shot in the fourth round. All in all, it was an overpowering performance by the 23-year-old Ryan Garcia tonight. 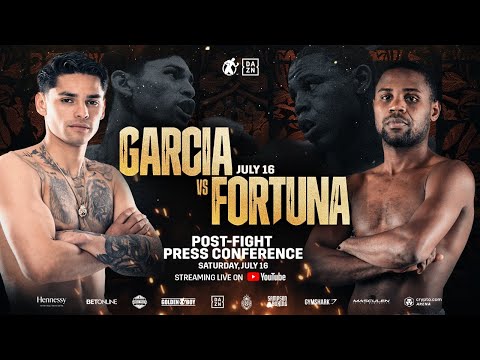 “Hopefully, he [Ryan] stays busy. He fought Tagoe, and now he’s going to fight Fortuna. After this, we’re going to need a bigger name. They’ve been talking about Tank and Ryan Garcia, but I highly, highly doubt we’re going to see that fight. I just cannot get myself to believe that.

“If I’m Oscar [De La Hoya], I’m starting to wonder if this guy wants to fight.

“You may as well take a chance on him now because if he was a regular prospect and he was a high level and was selling a lot, maybe you take your time going to the Tank fight because he’s a sure thing, and you’re going to try and use him.

“You don’t know what he’s going to do next. You may be inclined if you have him under contract to push him a little faster to get something out of him before the time runs out, or you lose him to another avenue of success he might have. He might just abandon boxing.

“So if I’m Oscar [De La Hoya], I do push the big money, the big risk fight now. If this fight [Tank vs. Ryan] doesn’t get made, I still can’t say it’s one guy’s fault or the other guy’s fault. Honestly, who has Tank Davis fought as well?” said Malignaggi.

KingRy needs to step it up

“The only difference between Tank Davis and Ryan Garcia is Tank Davis fights a little more often,” Malignaggi said. “But ultimately, we don’t know the guys he’s fighting either.

“I think there are a lot of hoops to jump through to see a [Tank] Davis and [Ryan] Garcia. The media are the biggest p****. Why not ask, ‘When are  you going to fight somebody?’ ‘Do you really want to be a boxer?’

“Or with Tank Davis, ‘When are you going to fight somebody that we’ve heard of when you’re headlining these pay-per-view events. Why do we have to learn who your opponents are when we fight them?

“Now you got random guys doing pay-per-views fighting random opponents. Nobody asks that question because nobody wants to get their credentials pulled. It’s all about getting the credential, so you’re a kiss a**. You’re just a professional a** kisser. You’re not a media guy,” Malignaggi said.

“We haven’t seen enough of Ryan besides the power to see the different levels, the different adjustments that he’d be able to make,” said Paulie. “I don’t think he has the fastest feet. So a little bit of range changing and mixing speed on the jabs and then off the faints.

“He hasn’t fought a very high level of opposition. Luke Campbell was a very good fighter, though. I’ll say that. That’s a solid win. I think it’s going to be a little bit of an awkward fight.

“Fortuna doesn’t give you a lot, and then all of a sudden, he throws some awkward shots.

“It’s not a great fight in terms of looking good. I feel he may stop Fortuna but get criticized for the performance. Fortuna is not a guy that’s easy to look good against. I also think Ryan isn’t the guy to get beat by Fortuna.

“Fortuna will randomly upset you and beat you and give you trouble because of his awkwardness. I do think that, ultimately, this is a win that Ryan probably gets. I just don’t know that he looks good doing it, and he’s going to get kind of criticized for it.

“I don’t think Fortuna is an easy guy to look good against for anybody. The boxing odds account for the fact that one guy will never get a decision anyway if it goes the distance,” said Malignaggi.

Will Fortuna get robbed?

“It’s fair [the wide odds in Ryan’s favor] because even if Fortuna wins the fight on points, he’ll get robbed,” said Malignaggi. “So, he’ll never get the decision, so you take that into account. So you looking at it now, Fortuna has to win by knockout in order to win the fight.

“I can remember me vs. Broner, for example. Broner was an 11:1 favorite, and I was like normal. I was betting on myself in all kinds of ways. Ultimately, when the decision came, I learned why he was 11:1 because he was never going to lose that decision.

“The WBA already sent his copy of the belt there. So, I learned something that night too, and also about the odds. Where does the boxing politics lie here? Can one guy get a decision against the other?

“Sometimes it actually plays out. I picked Bivol to get robbed against Canelo. I thought Bivol would best Canelo and not get the decision just like a couple of other guys that had fought Canelo had gotten, but on that night, Bivol did get a decision.

“Sometimes the politics do steer the other way, but for the most part, those odds are there because one guy can’t get a decision against the other guy no matter what.

Goosen a great trainer for Garcia

“I think he’s a good trainer. I think he’s very, very intelligent,” said Malignaggi when asked his opinion of Ryan’s new coach Joe Goosen. “I remember even in the corner, and I liked to watch him because he was very calm, he made his direct points, and they were direct.

“They weren’t confusing, and he always knew. When you would come back to the corner, I always noticed that he was the guy that knew what he was going to tell you, and he understood very well and understood how to give those instructions in a simplified yet very clear manner.

“I always liked that. When Corrales kept losing his mouthpiece before he knocked out Castillo, when they took him back to his corner, and they were washing out his mouthpiece, sometimes Goosen was as  simple as, ‘You better f**** get him now.’

“It was crazy because Goosen was very astute and very smart in a lot of ways he delivered his information, but sometimes, he knew that he had to keep it simple and even more direct and just throw out all that extra mumbo-jumbo.

“I like Joe Goosen a lot, and I think he’s a smart guy. Plus, he always had a unique fashion style in the corner. He was always with the hair combed very nicely and always wearing the Hawaiin button-down shirts,” said Malignaggi.

Lightweight contender Ryan Garcia takes on the tough veteran Javier Fortuna tonight at 140 in what should be an entertaining fight on DAZN at the Crypto Arena in Los Angeles.

Ryan (22-0, 18 KOs) has a lot of pressure on him to deliver a victory in an exemplary manner by knocking out the 33-year-old Fortuna (37-3-1, 26 KOs) to get the massive money PPV slot against Gervonta ‘Tank’ Davis in December.