Adrien Broner: “I know I’m going to be champion again”

By Sam Volz: Adrien ‘The Problem’ Broner was in a combative mood with the media on Thursday during the virtual Q & A press conference for his August 20th fight against Omar Figueroa.

Broner vs. Figueroa will be fighting at 140 rather than 147. It’s going to be interesting to see if Broner can make weight for the fight, as he hasn’t fought at 140 since his contest against Mikey Garcia in July 2017.

Broner looked emaciated in making weight and wound up losing a one-sided 12-round unanimous decision against Mikey.

The four-division world champion Broner (34-4-1, 24 KOs) took issue with some of the questions from the media, who were talking about his career coming to an edge. Broner rejected that notion, saying he would become “champion again.”

There aren’t any weak champions for Broner to pick up an easy belt against like he did in capturing his four division titles.

If you know anything about boxing, you’ll recognize that Broner beat four soft targets to win his 4 division world titles. Broner didn’t defeat any of the killers at 130, 135, 140, or 147.

When Broner did start stepping it up against better opposition against Marcos Maidana, Shawn Porter, Mikey Garcia, and Manny Pacquiao, he lost.

Moreover, Broner has five highly questionable fights where he arguably should have lost against these guys:

Broner hasn’t had a decisive victory since his stoppage of then 35-year-old Ashley Theophane in 2016.

Adrien’s only victories since then were two questionable decisions over Jovanie Santiago and Adrian Granados. It appeared to many boxing fans that the judges gave Broner a gift in those fights.

Former WBC lightweight champion Figueroa (28-2-1, 19 KOs) and Broner will be headlining on Showtime on August 20th at the Seminole Hard Rock Hotel and Casino in Hollywood, Florida. This is a Premier Boxing Champions event.

“I told them from the beginning that my next fight is at 140 pounds,” said Adrien Broner during his Q&A on Thursday about his fight against Omar Figueroa at 140 lbs on August 20th.

Figueroa has lost his last two fights, and many boxing fans feel he’s seen better days in his career. For Broner’s management to match him against Figueroa at this point in his career tells you how far his career has sunk.

“I’ll tell you one thing; I’ll be ready for whatever Omar Figueroa brings to the table,” said Broner. “I’m just going to keep preparing for my best ability, and on August 20th, I’ll be ready.

“I’m Adrien Broner, a four-time world champion in four different weight classes, so the expectations for me is always high. When I go in the ring, a lot of people expect a lot of great things out of me. I’m used to it. I’m just going in trying to get the victory.

“You’re talking to me like I’m 65 years old. Do you know who you talking to? I’m AB, man. This is what I’m going to tell you to do.  You bring your a** out here and try and go a round with me and see if I’ve got some more in the tank. 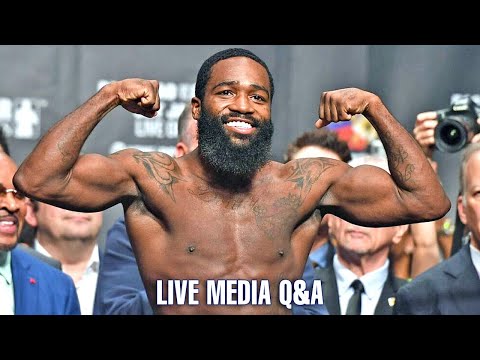 Omar Figueroa is hoping Adrien Broner tries for a knockout on Aug.20th »